It might be time to drill down on energy.

Energy has been the worst-performing S&P 500 sector in 2019, with over half of the stocks in the Energy Select Sector SPDR Fund (XLE) now more than 20% off their highs and technically in bear market territory.

The XLE — which caught a bid Thursday as crude oil prices surged to a two-month high — is up just over 5% year to date versus the S&P’s 24% gain.

Some strategists are steering clear of the group, while others see the pain as a low-cost opportunity.

Craig Johnson, senior technical research analyst and managing director at Piper Jaffray, said Thursday he had “no question” that now was the time to do a “bottom-fishing exercise.”

“Talking to all these institutional accounts, they do not like energy. They don’t want to touch energy. They’ve been burnt in energy for so long. And fundamentally, they’re going to point out all the problems with it,” Johnson said on CNBC’s “Trading Nation.” ”But, as a guy that likes to look at charts, these stocks tend to lead the market six to nine months ahead of time.”

First, he took a look at the stock of Valero Energy, the world’s biggest independent petroleum-refining company. The chart, he said, showed “very nice consolidation” followed by a breakout on a good amount of volume. 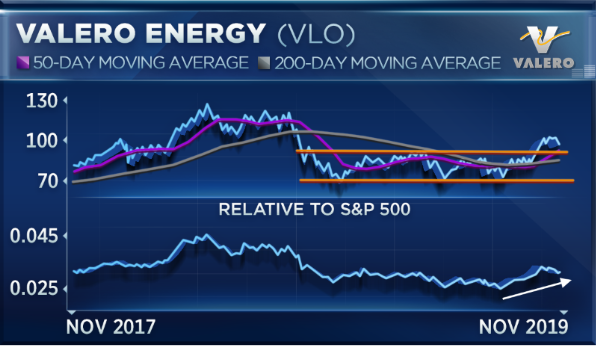 “Now we’re coming back to retest support. On this retest back to support toward $95, I’m a buyer of this stock because I think you’ve got upside to the 120s,” Johnson said.

Valero shares were just shy of the $99 level shortly after the opening bell on Friday, up less than half of 1%.

“Next, if you look at Marathon, you’ve got a pretty good double-bottom in the making here,” Johnson said, citing his chart of the stock of Marathon Petroleum, another large refiner. 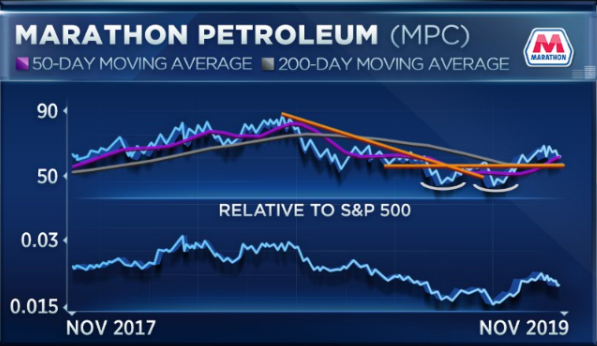 “[The] stock has broken out, it’s coming back to retest support, but, again, I like it on this pullback and retest of support,” the analyst said. Marathon Petroleum shares fell slightly at Friday’s open, hovering near the $63 level.

“This is a stock that’s sort of been in a downtrend for quite some time, but that downtrend is starting to flatten out here in the low 20s,” Johnson said. 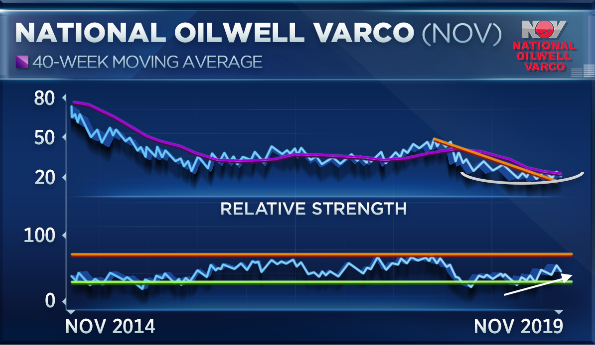 “If I’m right, this stock could rally as high as into the mid-to-low 40s,” he said. “So, again, lot of negativity, … but the charts are telling us something that is more constructive.”

Boris Schlossberg, managing director of FX strategy at BK Asset Management, took the negative side of the trade, saying in the same “Trading Nation” interview that he thought energy was “definitely a value trap.”

“Take a look at a stock like Exxon, which sports a 5% yield, but it doesn’t have the free cash flow to cover that dividend,” he said. “I think you’re going to see consolidation in the industry, and … the rescue case for investment in energy right now is that oil has to go up to probably 60, 70. Then that obviously makes all those stocks a much more interesting bet.”

With crude oil prices trading just above the $58 level in early Friday trading, Schlossberg’s ideal setup wasn’t quite in place yet.

“I think if you really want to play this — and I do think that energy itself as a sector is grossly undervalued at this point; it’s certainly one of the smallest weightings of the S&P historically — I would much rather just simply buy the VDE, which is the Vanguard Energy [ETF],” the strategist suggested. “[It has a] 3.5% yield and you don’t have idiosyncratic risk. If you want to bet on the idea of recovery, just bet on the whole broad sector. Don’t try to pick winners and losers here.”