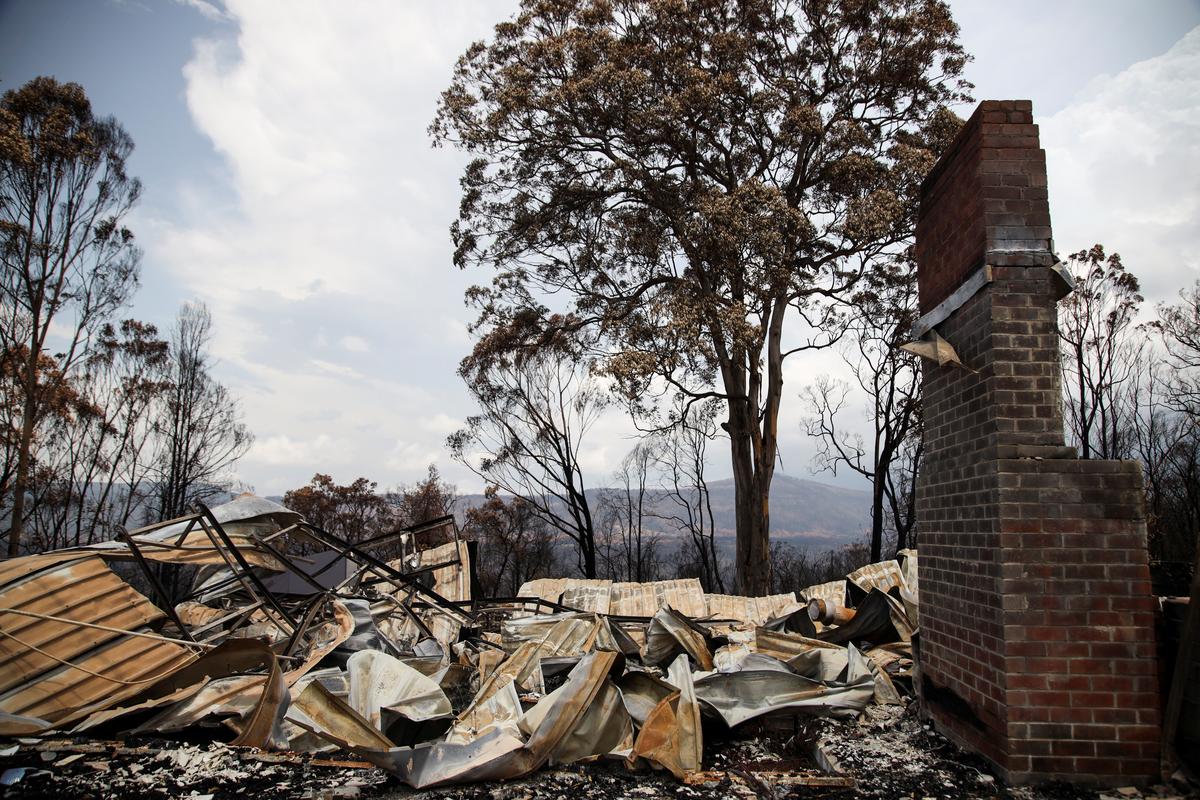 Rubble are seen at a property damaged by bushfires in Kangaroo Valley, Australia, January 20, 2020. REUTERS/Angie Teo

The warning from the world’s biggest miner showed how an unusually long bushfire season that has scorched an area one-third the size of Germany is damaging the world’s No. 14 economy. Australia’s tourism and insurance industries have already foreshadowed they face a A$1 billion ($687 million) hit each from the fires.

Scores of fires were still burning on the country’s east coast on Tuesday despite thunderstorms and rain in recent days.

Officials in New South Wales issued a high fire danger rating on the state’s south coast, while temperatures were forecast to rise in inland parts of Victoria state and neighboring South Australia on Wednesday.

Combined with strong winds, the hotter temperatures will potentially fan existing bushfires and spark new ones into life, leading officials to declare “extreme fire danger” in some areas.

“Not all the fires received the heavy rain over the past few days, so local fire crews will definitely be keeping a close eye on those firefronts,” Bureau of Meteorology meteorologist Philip Landvogt said by telephone.

BHP said smoke and dust from bushfires had reduced air quality at its energy coal plants in New South Wales state, where hundreds of fires have raged, affecting production in December.

“If air quality continues to deteriorate then operations could be constrained further in the second half of the year,” it added in a scheduled production update.

The fierce bushfires in Australia’s east have killed 29 people and millions of animals, destroyed more than 2,500 homes and razed 11 million hectares (27 million acres) of wilderness since September. The crisis follows three years of drought that experts have linked to climate change.

The disruption has extended to the capital, Canberra, and its two biggest cities, Sydney and Melbourne, all of which have been repeatedly blanketed in thick smoke that has earned them air quality ratings among the worst in the world.

A survey by Deloitte of 2,000 executives published on Tuesday showed 89% of Australian business executives viewed climate change and environmental sustainability as the “societal issue of greatest focus,” compared to 54% world-wide.

Here are key events in the bushfire crisis:

* Early on Tuesday, 86 fires were burning across New South Wales, none above the lowest warning level. There were 27 emergency warnings in Victoria, including one flash flood warning.

* The Bureau of Meteorology warned the East Gippsland region to expect strong winds after thunderstorms rolled through a day earlier. Earlier this month, people in East Gippsland were evacuated by Navy ships as bushfires destroyed whole towns.

* The NSW state government, meanwhile, said it was increasing a grant for primary producers affected by the fires to A$75,000, from A$15,000 previously.

* The Australian Open tennis tournament continues in Melbourne. The city’s air quality was rated as “good”, according to the Air Quality Index, having been “hazardous” less than a week earlier, when a player collapsed in the preliminary rounds.

* The tennis community has raised more than A$50 million for bushfire relief, according to Tennis Australia.