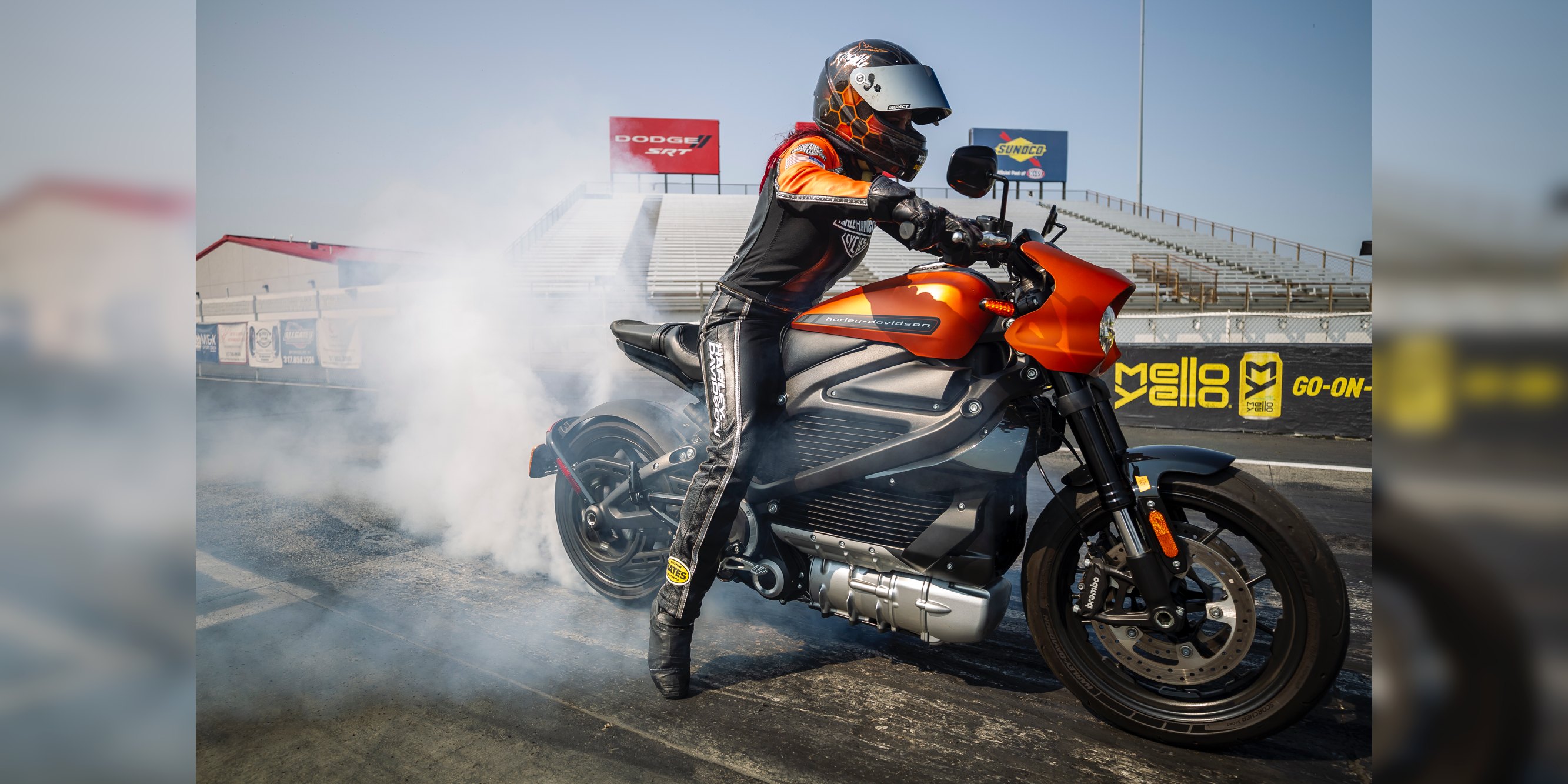 Award-winning Pro-rider Angelle Sampey is no stranger to putting down fast track times. And now we’re getting a chance to see her put her skills to the test on a Harley-Davidson LiveWire electric motorcycle, ultimately coming away with a new record-breaking performance.

Sampey is a Harley-Davidson Screamin’ Eagle/Vance & Hines team rider, and last weekend took to the 1/4 mile at the Denso Spark Plugs NHRA U.S. Nationals at the Lucas Oil Raceway in Indianapolis, Indiana.

She was joined by fellow riders and teammates Andrew Hines and Ed Krawiec, all three of whom made head to head runs down the track.

Sampey consistently came away the fastest though, and in doing so broke the record for the fastest LiveWire runs yet.

She covered the eighth-mile in 7.017 seconds and the quarter-mile in 11.156 seconds, topping out at 110.35 mph (177.6 km/h) across the line. It should be noted that the Harley-Davidson LiveWire is software limited in stock form to a maximum speed of 110 mph (177 km/h), meaning Sampey had already maxed out the bike before crossing the line.

Interestingly, this was also the first time Sampey had ever ridden the Harley-Davidson LiveWire, making her achievement all the more impressive.

““Let me tell you what’s amazing. That was the first time I rode the LiveWire. I could not wait to get it on the track. The LiveWire is so easy to ride. Just twist the throttle and go, and you really go!”

The fastest we’ve previously seen a LiveWire rider complete the eight-mile and quarter-mile was during an all-electric race between a LiveWire and a Tesla Model 3 Performance this past April. Then the LiveWire rider laid down times of 7.358 seconds and 11.648 seconds, respectively.

Unlike that race, which featured the two vehicle owners racing their private EVs head-to-head, Sampey’s race last weekend was an exhibition performed with the help of Harley-Davidson. It’s just the latest in a long line of promotions that show H-D is serious about getting the LiveWire electric motorcycle out in front of the public.

Later this week, Ewan McGregor and Charlie Boorman’s Long Way Up series will debut on Apple TV+. In the series, the pair teamed up with H-D to ride two LiveWire electric motorcycles over 15,000 miles (24,000 km) from the southern tip of Argentina all the way to California.

We didn’t ride quite that far in our own review of the LiveWire electric motorcycle, but we still found it to be a fun and capable bike. Check out our review video below.

The Science of Dreaming
McLaren boss says electric vehicle tech doesn’t yet work for supercars
Amazon’s newest Ring device is a flying security camera drone
The US National Academy of Sciences can now kick out harassers. So why hasn’t it?
NASA 2020: Are You Ready?