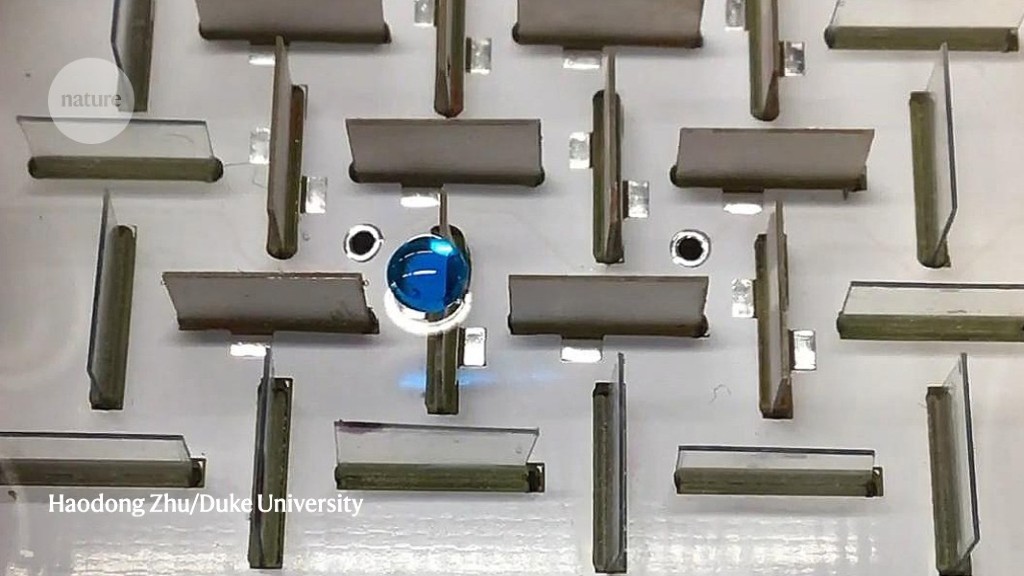 The whirlpools created by sound waves in a liquid can be used to move biological objects.

Biologists increasingly use ultrasound waves, or ‘acoustic tweezers’ to trap and manipulate stem cells and other samples without damaging them. But in liquids the waves can create spirals of flow, known as vortices, that disrupt the precision of the tweezers.

Tony Jun Huang at Duke University in Durham, North Carolina, and his colleagues developed a low-power device that harnesses such vortices to move objects on a liquid’s surface. The team created an array of upright plates at alternating right angles atop a small base. Some of the plates can vibrate to create sound waves; the others form barriers to fluid flow. The array is submerged in a shallow pool of oil.

When a plate vibrates, it produces a stable pair of vortices, one on each side of the plate. Together the vortices push surface objects towards the point between them, above the plate. By activating plates in a programmed sequence the team controlled the movement of objects, including a zebrafish embryo, around the liquid’s surface.

How Many Things Are There?
What Is Taurine and Why’s It in My Energy Drink?
China gears up for space station, cargo and crewed mission launches
Why Do You Want to Squeeze Cute Things?
Facebook will block Trump from posting at least for the remainder of his term