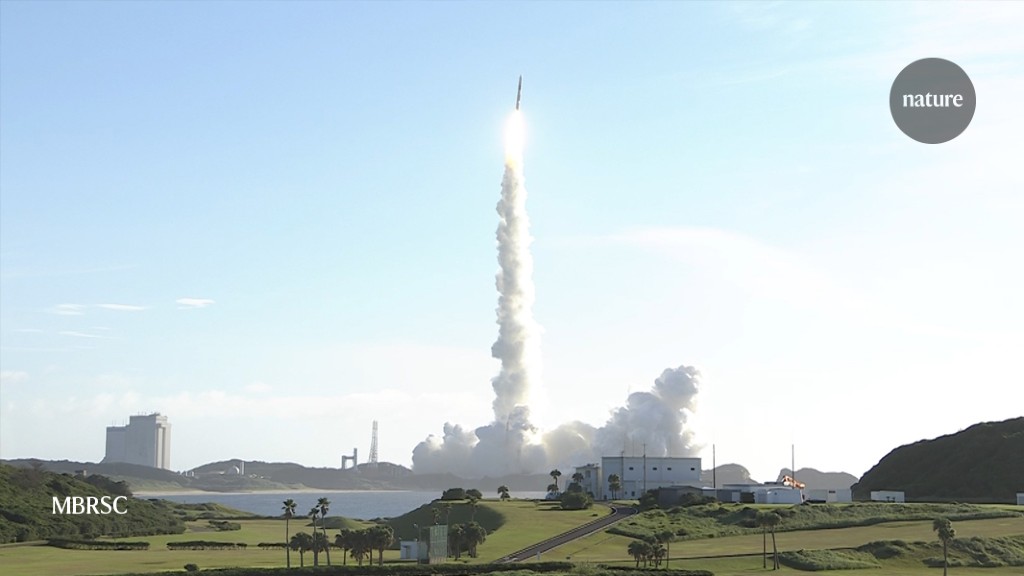 The United Arab Emirates’ Hope orbiter is now winging its way to Mars after launching successfully from the Tanegashima Space Center near Minamitane, Japan. The probe, built by the United Arab Emirates (UAE) together with US partners, is the first interplanetary mission from any Arab state.

The car-sized, US$200-million craft lifted into Earth’s orbit on a Mitsubishi H-IIA rocket at 6:58 a.m. local time on 20 July. After launch a second stage of the rocket fired, putting the craft on its Mars trajectory.

“The Hope probe has performed perfectly so far and we’re in great shape,” the mission’s project director, Omran Sharaf, said in a statement. “The team at MBRSC are delighted and celebrating, obviously, but there’s a lot of work yet to go,” said

Mission controllers now face a 7-month wait as Hope travels the 493,000,000-kilometre journey to the red planet, entering Martian orbit in February 2021, ahead of the country’s 50th birthday. Hope is one of three missions to Mars this year, with launches from the United States and China due over the coming weeks.

For many scientists involved in Hope, entering Mars’ orbit will be the real crunch point. “What I’m dreading more is the Mars orbital insertion,” says Sarah Al Amiri, the mission’s deputy project manager and science lead. Although launch was out the mission team’s hands, orbital insertion will be a direct test of whether the spacecraft they built works as planned, she says.

After insertion, Al Amiri’s team will turn its attention to the science. Hope will study the Martian atmosphere using an unusual elliptical orbit that allows it to observe almost the entire planet, across both night and day, in each 55-hour cycle. It will produce the first global map of the Martian weather, over days and seasons, says Al Amiri.

The team hopes that the data will reveal how atmospheric processes cause Mars to lose hydrogen and oxygen into space — which is thought to have contributed to the once-lush planet becoming barren. “This allows us to have a more holistic understanding of the planet and how it lost its atmosphere, and also the dynamics of the atmosphere as a whole,” says Al Amiri.

The small Gulf state’s route to becoming an emerging space power has been short and unusually fast. The mission began just six years ago, alongside the creation of the UAE’s space agency, when the country had only recently begun to design and build Earth-observation satellites. Hope was designed as a catalyst for science more broadly in the region, and to promote research careers in a country whose oil wealth is on the wane.

Without experience of their own in interplanetary missions, the UAE Space Agency hired US collaborators, mainly from the University of Colorado, Boulder, to guide them through the process and build up science and engineering capacity within the UAE.

“This marks a historic moment for the United Arab Emirates and the entire Arab world and I could not be more honoured to be a part of this incredible day,” says Brett Landin, an engineer at the University of Colorado Boulder, who leads the mission’s spacecraft team. “As much as I’d like for our team to be able to celebrate and take a well-deserved break, the difficult work of operating the spacecraft has now just begun.”

Construction mostly took place in the United States, but with the involvement of 75 Emirati scientists and engineers from the MBRSC who were dedicated full-time to the mission. Operations for Hope will be run out of mission control, based at the MBRSC.

According to the UAE’s minister of cabinet affairs, Mohammad bin Abdullah Al Gergawi, the mission’s cost came in at a relatively cheap US$200 million. This includes spacecraft development, launch and ground operation, a spokesperson confirmed to Nature. This is more expensive than India’s Mangalyaan mission, which cost around US$75 million, but is cheaper than full-fledged NASA missions, such as the US$720-million Mars Reconnaissance Orbiter. The UAE Space Agency had declined to release the cost until now.

Although the mission was on time and within budget, COVID-19 presented a final challenge. International travel restrictions, including a mandatory 14-day quarantine period for all those entering Japan, meant that the mission had to be shipped earlier than planned, at the expense of some last-minute tests. Groups of engineers, travelling two weeks apart, had to tag-team to make sure the craft was always in expert hands while they adhered to quarantine rules. The accelerated schedule meant the second team was still able to make it to the launch site in time for preparations.

At mission control in Dubai, celebrations continued into the early hours. “There is an accumulation of many emotions,” says Fatma Lootah, a member of the mission’s science team at the MBRSC. “We are excited and we are ready, and by we, I mean the entire nation,” she says, adding that pictures of the probe cover the country’s billboards and screens.

The mission’s success is not only about launching successfully, or even getting to Mars, but bringing about all the ripple effects on education and economy in the UAE, says Al Amiri. “The impact we have is something I’m looking forward to seeing over the next few years,” she says.

NASA’s New Mars Rover ‘Perseverance’ Launched, Seeks Signs of Life
NASA’s Mars-Bound Spaceship Carrying Perseverance Rover Faces Technical Issues
The UAE becomes the first Arab country to launch its own nuclear energy program
Trump says he will ban TikTok through an executive action
How African scientists can give back to their home continent