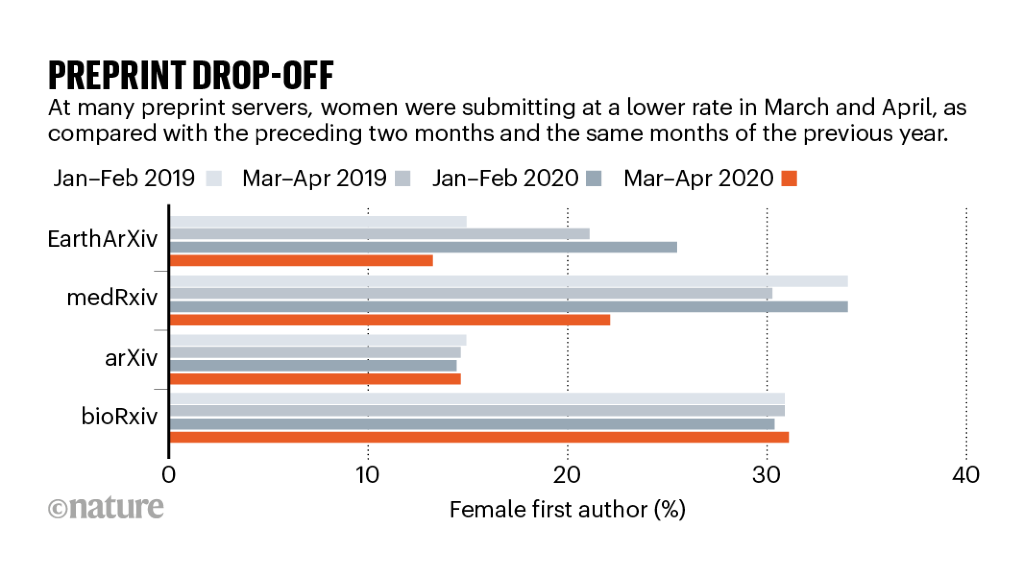 Quarantined with a six-year-old child underfoot, Megan Frederickson wondered how academics were managing to write papers during the COVID-19 pandemic. Lockdowns implemented to stem coronavirus spread meant that, overnight, many households worldwide had become an intersection of work, school and home life. Conversations on Twitter seemed to confirm Frederickson’s suspicions about the consequences: female academics, taking up increased childcare responsibilities, were falling behind their male peers at work.

But Frederickson, an ecologist at the University of Toronto, Canada, wanted to see what the data said. So, she looked at preprint servers to investigate whether women were posting fewer studies than they were before lockdowns began. The analysis — and several others — suggests that, across disciplines, women’s publishing rate has fallen relative to men’s amid the pandemic.

The results are consistent with the literature on the division of childcare between men and women, says Molly King, a sociologist at Santa Clara University in California. Evidence suggests that male academics are more likely to have a partner who does not work outside the home; their female colleagues, especially those in the natural sciences, are more likely to have a partner who is also an academic. Even in those dual-academic households the evidence shows that women perform more household labour than men do, she says. King suspects the same holds true for childcare.

In her analysis, Frederickson focused on the two preprint servers that she uses: the physical-sciences repository arXiv, and bioRxiv for the life sciences. To determine the gender of more than 73,000 author names on 36,529 preprints, she compared the names with those in the US Social Security Administration’s baby-name database, which registers the names and genders of children born in the United States.

Frederickson looked at arXiv studies posted between 15 March and 15 April in 2019 and in 2020. The number of women who authored preprints grew by 2.7% from 2019 to 2020 — but the number of male authors increased by 6.4% over that period. The increase in male authorship of bioRxiv preprints also outstripped that of female authorship, although by a smaller margin (see ‘Preprint drop-off’). (The two servers are not directly comparable in Frederickson’s analysis because the program that she used pulled the names of only corresponding authors from bioRxiv, whereas all arXiv authors were included.)

“The differences are modest, but they’re there,” Frederickson says. She notes that the lockdowns so far have been relatively short compared with the usual research timeline, so the long-term implications of for women’s careers are still unclear.

The limitations of these types of name-based analysis are well-known. Using names to predict gender can exclude non-binary people, and can misgender others. They are more likely to exclude authors with non-Western names. And between disciplines, their utility can vary because of naming conventions — such as the use of initials instead of given names, as is common in astrophysics. Still, says Frederickson, over a large sample size, they can provide valuable insights into gender disparities in academia.

Sugimoto points out that that preprints being published even now probably rely on labour that was performed many months ago. “The scientific publication process doesn’t lend itself to timely analyses,” she says. So her study also included databases that log registered reports, which indicate the initiation of new research projects.

In 2 of the 3 registered-report repositories, covering more than 14,000 reports with authors whose genders could be matched, Sugimoto’s team found a decrease in the proportion of submissions by female principal investigators from March and April of 2019 to the same months in 2020, when lockdowns started. They also saw a declining proportion of women publishing on several preprint servers, including EarthArXiv and medRxiv. These differences were more pronounced when looking at first authors, who are usually early-career researchers, than at last authors, who are often the most senior faculty members on a study.

“This is what’s the most worrying to me, because those consequences are long-term,” Sugimoto says. “The best predictor of a publication is a previous publication.”

In economics, too, there are indications that the pandemic is disproportionately affecting younger researchers, says Noriko Amano-Patiño, an economist at the University of Cambridge, UK. Taken as a whole, there aren’t clear discrepancies in the overall number of working papers — a preprint-like publication format in economics — that have been submitted to three major repositories and invited commentaries submitted to a fourth site that publishes research-based policy analyses.

She and her collaborators also examined who was working on pandemic-related research questions using a COVID-19-specific repository. Although women have consistently authored about 20% of working papers since 2015, they make up only 12% of the authors of new COVID-19-related research. Amano-Patiño suspects that, in addition to their childcare responsibilities, early- and mid-career researchers, especially women, might be more risk-averse and thus less likely to jump into a new field of research. “Mostly senior economists are taking their bite into these new areas,” says Amano-Patiño. “And junior women are the ones that seem to be missing out the most.”

“Unfortunately, these findings are not surprising,” says Olga Shurchkov, an economist at Wellesley College in Massachusetts. Shurchkov came to similar conclusions in a separate analysis of economists’ productivity during the pandemic. And a preprint posted to arXiv on 13 May1 shows the same trends in pandemic-related medical literature (see ‘COVID-19 effect’). Compared with the proportion of women among authors of nearly 40,000 articles published in US medical journals in 2019, the proportion of female authors on COVID-19 papers has dropped by 16%.

Increased childcare responsibility is one issue. In addition, women are more likely to take care of ailing relatives, says Rosario Rogel-Salazar, a sociologist at the Autonomous University of Mexico State in Toluca. These effects are probably exacerbated in the global south, she notes, because women there have more children on average than do their counterparts in the global north.

And women face other barriers to productivity. Female faculty, on average, shoulder more teaching responsibilities, so the sudden shift to online teaching — and the curriculum adjustments that it requires — disproportionately affects women, King says. And because many institutions are shut owing to the pandemic, non-research university commitments — such as participation in hiring and curriculum committees — are probably taking up less time. These are often dominated by senior faculty members — more of whom are men. As a result, men could find themselves with more time to write papers while women experience the opposite.

Because these effects will compound as lockdowns persist, universities and funders should take steps to mitigate gender disparities as quickly as possible, Shurchkov says. “They point to a problem that, if left unaddressed, can potentially have grave consequences for diversity in academia.”

PathSpot sells a scanner that fact checks your handwashing efficacy
The Strange Sense of Direction of Migratory Animal Species
TikTok nabs Disney’s streaming boss to be its new CEO
With an active hurricane season on the way, officials prep disaster plans for coronavirus challenges
Tackle coronavirus in vulnerable communities