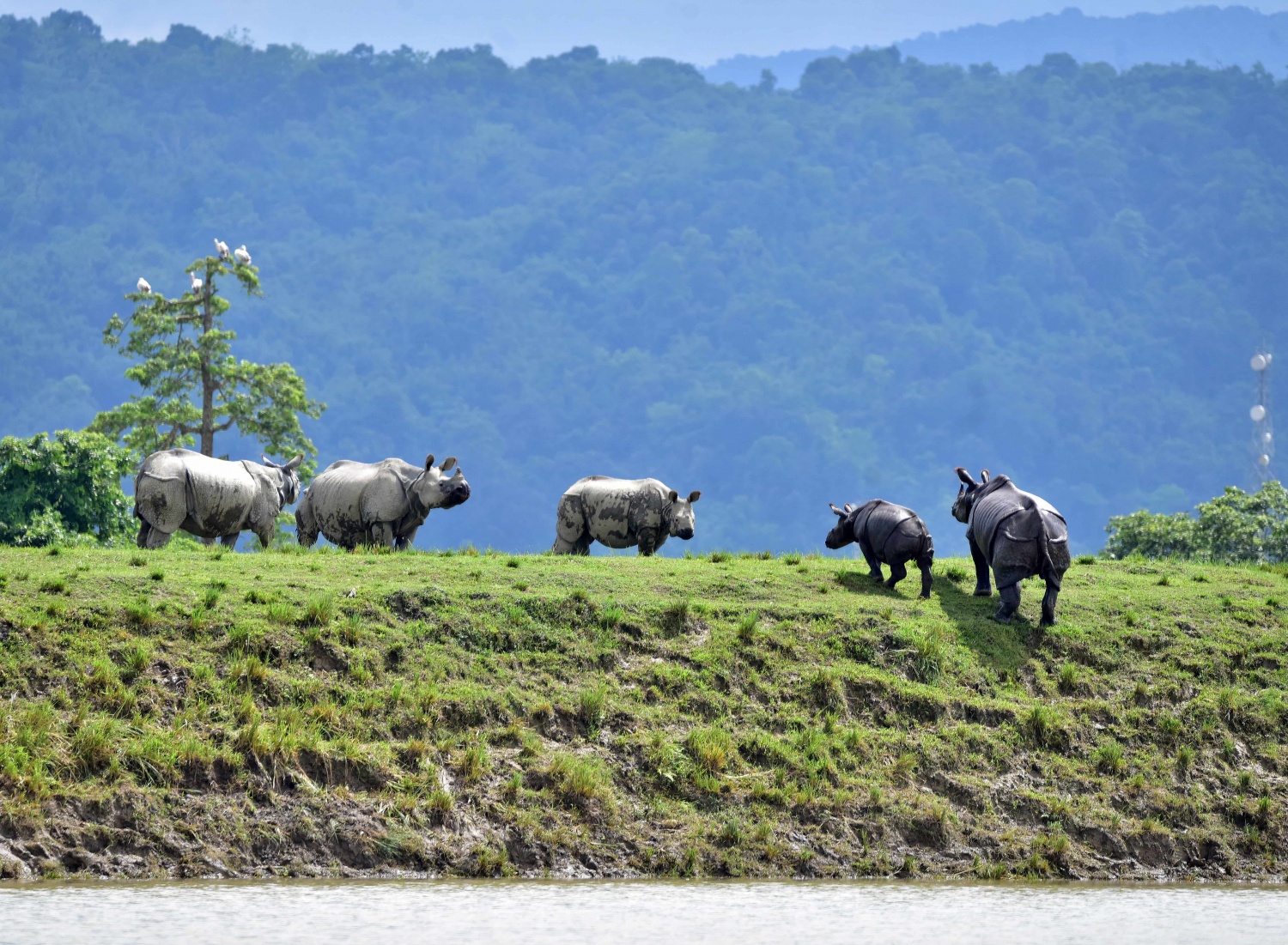 The flooding caused by the annual seasonal rainfall in the state of Assam has claimed more than 80 lives in northeast India, displaced 2.5 million people, and killed more than a hundred wildlife, 8 of which are the one-horned rhinoceros.

Assam is known for Kaziranga National Park and Tiger Reserve, a UNESCO World Heritage Site and the home of around 2,400 endangered one-horned rhinos and 121 tigers. The torrential monsoon rains and flooding this year have submerged 85 percent of the park underwater.

Forty-three 43 forest camps within the park are flooded, while six of which have been vacated. Park officials disclosed that the recent rains drowned eight rhinos, while one of them died of natural causes a month ago.

A rhino have strayed out near bandar dhubi area at Bagori Range yesterday and taking rest near NH37. The DRIVE OUT Operation is being carried out to guide the rhino to park. Our staffs along with @nagaonpolice are guarding the area. Drive Slow.@ParimalSuklaba1 @RandeepHooda pic.twitter.com/3avQXbqtHF — Kaziranga National Park & Tiger Reserve (@kaziranga_) July 18, 2020

More than 100 wild animals such as deer, buffalo, and porcupines also died from drowning and being hit by vehicles as they tried to escape the rising floodwaters. The animals moved up onto the park’s elevated roads and areas closer to humans.

Kaziranga National Park posted on twitter a photo of a rhino, looking exhausted by the flood, and was on the highway of the park. The rhino stayed on the highway for several hours and moved back to the park on Sunday morning.

According to the park’s wildlife veterinarian Shamshul Ali, the said rhino had some vision problems and was extremely exhausted. They gave the rhino treatment and vitamins. As soon as it recovered, it started moving back to the park.

According to a bulletin issued by the park authorities, 60 animals: 36 hog deer, eight rhinos, three wild buffalo, one python, seven wild boar, two swamp deer, one Sambar and two porcupines died from drowning, while fifteen hog dears were hit by vehicles on the national highway near the park as it tried to escape floodwaters.

There are 51 injured animals and 134 animals rescued. Park personnel also announced that they had released 110 animals in the wild. Last year, the heavy monsoon and flooding also left almost 200 animals dead, 18 of which are the endangered rhino.

The park experiences flooding each year, but according to Bibhab Talukdar, founder of Aaranyak, a wildlife NGO, this season seem to be severe as there are not many intervals in between. The torrential rains and flooding have also flooded thousands of villages, prompting the establishment of relief camps for the displaced.

The flooding this year is worsened by the coronavirus pandemic as India has more than one million cases reported all over the country, the third-largest cases of infected in the world. While there are 80 deaths recorded in Assam alone, flooding in Nepal has claimed a death toll of 117. Bangladesh reports that 67 people had died, and 2.6 had been affected by the floods.

Eastern India, Nepal, and Bangladesh have claimed more than 200 lives and sent 4 million fleeing their homes. The annual monsoon rains happen from June to September, causing floods and havoc. Authorities warn India, Nepal, and Bangladesh to expect more flooding and the damage and destruction that comes along with it as more heavy rainfall is expected until September.

He (Rhino who strayed out) has moved into the Park Territory. He is regaining his strength. Team @kaziranga_ is giving him his natural food. We along with @nagaonpolice are guarding the area for his safety. Thank you everyone for the support.@CMOfficeAssam @ParimalSuklaba1 pic.twitter.com/9xeCRMdVDf — Kaziranga National Park & Tiger Reserve (@kaziranga_) July 19, 2020

READ NEXT: New Zealand’s New Alert System for White Island Could Save Lives

Pretzels | How It’s Made
Terreform ONE’s plans to upend cities and suburbs in a post-pandemic world
How Hot Can It Get?
Saturation Divers Live Under the Sea for Weeks | World’s Strangest
The Most Dangerous Part of Space Travel: Coming Home