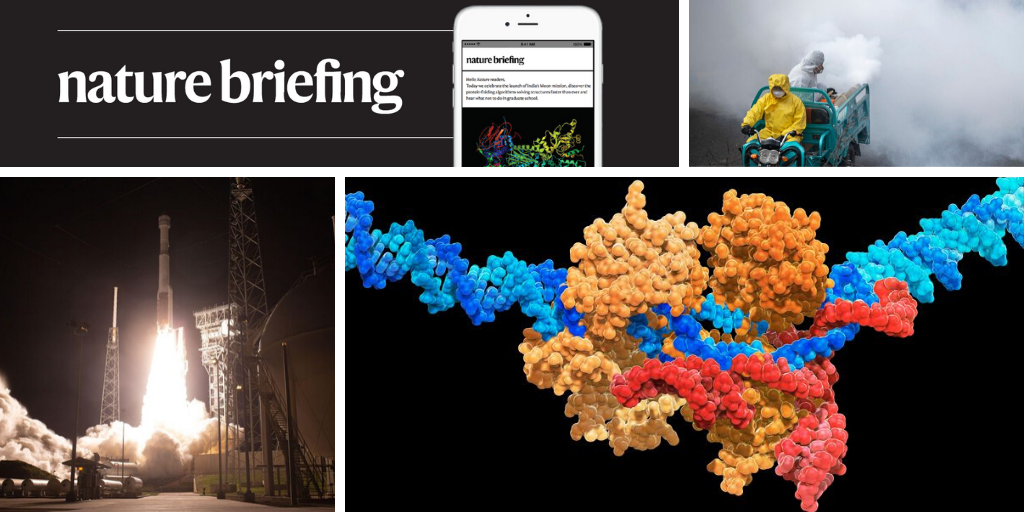 Chemical biologists have engineered enzymes to boost the accuracy of a super-precise version of the CRISPR genome-editing tool. The enzymes are less likely than the conventional CRISPR system to introduce unwanted errors when making single-letter changes to the genome, and could allow researchers to develop safer gene therapies. “The era of human genome editing is in its fragile beginnings now, and we all feel a responsibility to do everything possible to minimize the risk of adverse effects,” says David Liu, whose group developed the enzymes.

NASA, artificial intelligence and quantum computing would all see dramatic boosts in funding for 2021 under a proposed budget from the administration of US President Donald Trump, released yesterday. The National Science Foundation, National Institutes of Health and Department of Energy are all slated for cuts under the budget proposal. Congress has repeatedly rebuffed such requests for cuts, and has instead chosen to increase science spending in recent years.

Harmful mutations might have been the death knell for the last woolly mammoths on Earth. Scientists synthesized genes from a tooth that belonged to a mammoth from the last surviving population, which lived on Wrangel Island in the Arctic Ocean 4,000 years ago. The genes contained mutations that can cause reduced male fertility, diabetes and a loss of the ability to smell the flowers that made up a large part of the mammoths’ diet.

• The World Health Organization (WHO) today officially named the coronavirus disease COVID-19. This will replace its provisional designation, 2019-nCoV. The name, which avoids finger-pointing at any particular place or people, simply indicates a coronavirus disease that arose in 2019. (STAT | 3 min read)

• The number of people in China who have been killed by COVID-19 is now more than 1,000, the nation’s health authorities report. Worldwide, more than 43,000 people have been infected. (Nature | continuously updated)

• Vaccines usually take years to develop (if they can be created at all). Technological innovations and a streamlined development process could cut that time to months for COVID-19. Even at that rate, it would be too late to fight the current outbreak, but a vaccine could be essential if the virus becomes established. (The Economist)

• The outbreak has put WHO director-general Tedros Adhanom Ghebreyesus in “a near-impossible situation”: how to control a fast-moving epidemic without stepping on China’s toes. (Science | 13 min read)

• Are you a researcher who has been affected in some way by COVID-19? We’d like to hear from you to inform our news coverage. Please take our short survey.

Mathematicians have uncovered a simple universal law to describe the type of turbulence you see when mixing paint or stirring milk into coffee. Researchers harnessed the handy statistical characteristics of randomness to show that these systems, although chaotic, mix with a predictable structure.

Chemist Jack Baldwin, who died last month aged 81, was best known for formulating a set of rules that predict how likely it is that atoms (mostly carbon) in a synthesis will link into rings, a structural feature of many biological molecules and drugs. Published in just three pages (with a one-sentence abstract) in 1976, Baldwin’s rules became fundamental to organic synthesis in the pharmaceutical and agrochemical industries, and to understanding biology from a chemical perspective.

There is some evidence that heavy users of social media have higher rates of depression and anxiety than do light users — and adolescents tend to be among those who use it most. Psychologists Jonathan Haidt and Nick Allen discuss how the technology affects adolescents’ mental health, and how digital devices might be used to improve well-being.

Herder Zhuman Ramazan found a meteorite the size of a small car in a pasture in China’s Xinjiang region in 1986. Officials seized it in 2011, and he has been suing them since 2015. (Reason)