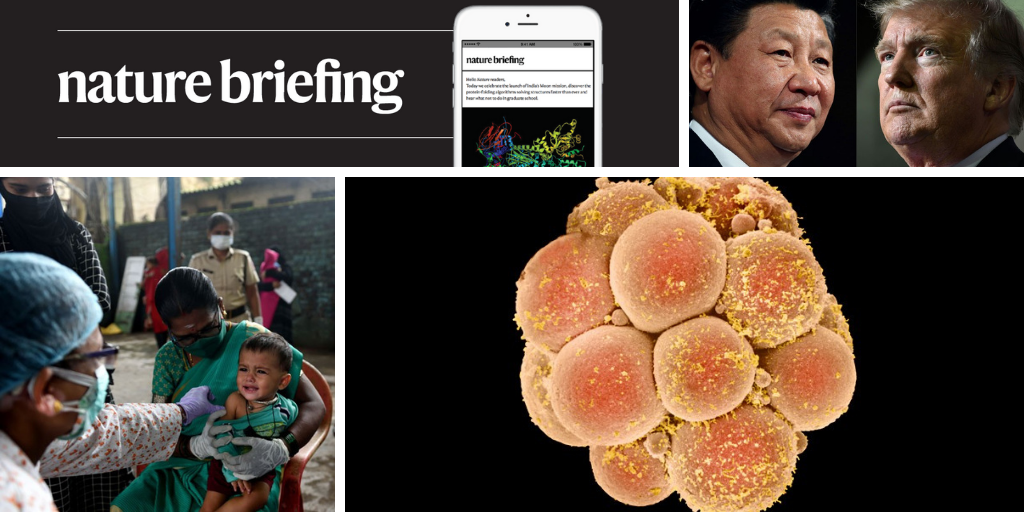 Gene editing in human embryos could one day prevent some parents from passing on serious genetic disorders to their offspring — but only in rare circumstances should it be considered. And for now, the technique has not been shown to be safe or effective to use at all. That’s the conclusion of an expert panel, convened by the US National Academy of Medicine, the US National Academy of Sciences and the UK Royal Society, which has released a report about heritable human-genome editing. The group was formed following the shock announcement from genomics researcher He Jiankui who reported in November 2018 that he had created the first ‘CRISPR babies’.

Amid escalating tensions between the United States and China, US authorities are increasing their scrutiny of links between researchers from China and the People’s Liberation Army (PLA). But with PLA fingers in so many pies — many of the top hospitals in China are affiliated with the military, for example — there are concerns that scientists might be unfairly accused of espionage. The extent to which US research is actually being funnelled to the Chinese military, and how to block it meaningfully and fairly if it is, remain unclear, say experts — as do the parameters that the United States is now using to label foreign scientists and collaborations as a threat.

Water, water, everywhere — but where did it all come from? To find out, planetary scientists looked to enstatite chondrite meteorites, which formed from the same building blocks that Earth did. The hydrogen contents and deuterium/hydrogen ratios of those meteorites suggest that most of Earth’s water could have been there right from our planet’s formation. This upends the idea that all of our water must have come from comets and asteroids that formed further from the Sun — beyond the ‘snow line’ in the early solar nebula where it was cool enough for water to remain liquid.

As one of the world’s biggest vaccine manufacturers, India is likely to supply much of the doses of any future SARS-CoV-2 vaccine. Several companies have agreements to make coronavirus vaccines being developed by international drug companies. The Indian government says some of these doses can be exported, as long as a proportion remains in India. But even with this commitment, researchers say vaccine-makers might struggle to produce enough doses fast enough to control the country’s huge outbreak — currently the world’s third largest. Distributing vaccines to rural parts of the country with weak health-care systems will be a huge challenge.

The state of COVID-19 vaccines now

As of today, there are 321 confirmed COVID-19 vaccine candidates, 32 of which have already entered clinical trials. Get a firm grip on this incredibly fast-moving field with a short, data-driven overview by four experts at the Coalition for Epidemic Preparedness Innovations (CEPI), one of the world’s leading vaccine funders. This is an update on CEPI’s last review, recommended in the Briefing in April, when an eye-watering 78 vaccines were already in progress.

‘I hope that real change comes out of this moment’

The coronavirus pandemic has ripped away the blinders that were obscuring the structural racism in health care in the United States, says physician-scientist Uché Blackstock. “Here, right now, [as of Aug 18], one in 1125 Black Americans have died from coronavirus,” she says. “And there’s another statistic: if Black Americans had died at the same rate as White Americans, it is estimated that about 19 500 Black people would still be alive.” Blackstock hopes that these bitter truths will inspire work towards a more just future. “I have to feel that way because this moment feels so painful, and also so tenuous, but it’s also a moment when people are having conversations that they never had before.”

While recruiting, how do you make your laboratory or department attractive to female candidates and others from marginalized backgrounds? Four female scientists with experience in the job markets in computer science, electrical and computer engineering, information science, cognitive science, public health, public policy and statistics share their top tips. They recommend inviting candidates to give a talk so that you can showcase what you offer, demonstrating by your actions how colleagues are treated in your workplace and not shoehorning clumsy mentions of diversity into your interviews.

To explore the tension between the contrasting realities of the general theory of relativity and quantum mechanics, theoretical physicist Paul Halpern finds inspiration in a relationship. In Synchronicity, he relates how Austrian physicist Wolfgang Pauli, distraught and drinking heavily after his divorce in 1930, sought out Swiss psychoanalyst Carl Jung for therapy. Jung, in turn, received a schooling in quantum physics.

Despite over a century of use, there’s a lot we don’t know about how anaesthetics function. This week, researchers have identified how some of them they bind to a specific neuronal receptor. Find out more in this week’s podcast, along with the latest science news.