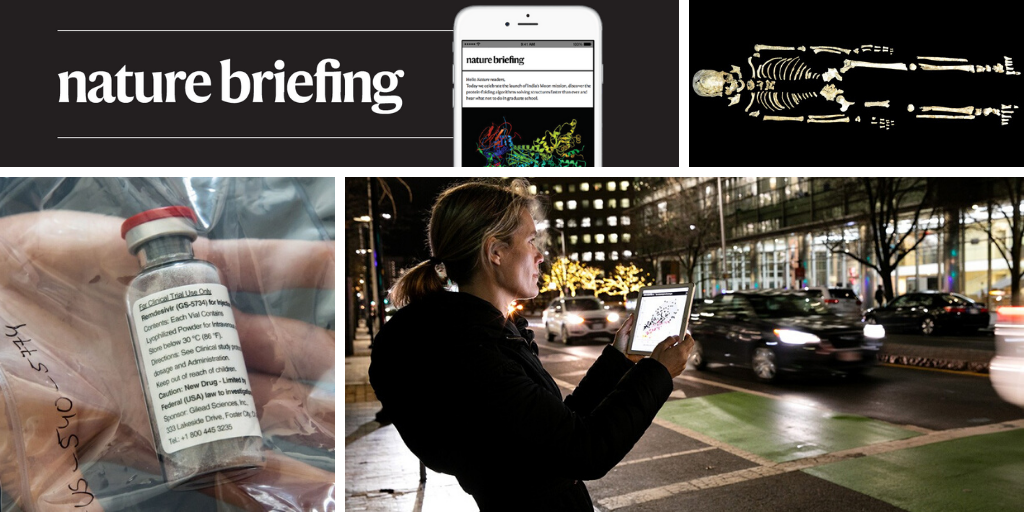 The first large ancient-genome studies of East Asia suggest that many of its inhabitants descend from two once-distinct populations. Two research groups analysed dozens of genomes from individuals who lived in the region, including what is now China, between 9,500 and 300 years ago. The genomes show that the two populations remained separate for thousands of years, but over time they began interbreeding. This could solve the mystery of how farming spread through the region — it was adopted as farmers and hunter-gatherers mixed. That’s different from what happened in western Eurasia; ancient-genome studies have found that farmers with Middle Eastern ancestry largely replaced hunter-gatherers in Europe.

How to make enough coronavirus drugs

Dozens of coronavirus drugs are in development (for example, there were encouraging drips of data from a large clinical trial of the antiviral remdesivir last month). Next, we face the challenge of ramping up complex manufacturing processes to produce sufficient quantities of successful therapies to treat everyone in need. Drug manufacturers face supply-chain weaknesses and sourcing issues. And each treatment will face different challenges when scaling up production. (Nature | 7 min read)

“The stakes have never been higher”

The government of Togo wants to send cash payments to thousands of vulnerable households. In Uganda, the local phone company is helping to direct government assistance to people in vulnerable communities. In Bangladesh, the government hopes to use phone records to determine who is eligible for emergency assistance. All these efforts could dramatically increase the timeliness and effectiveness of humanitarian responses — while minimizing the need for face-to-face contact, argues information-scientist Joshua Blumenstock. He outlines how the immense privacy risks and practical challenges of these methods can be overcome with the cautious use of machine learning. (Nature | 5 min read)

Past pandemics reveal lessons for the present

Lessons from the Black Death in fourteenth-century London and smallpox in Native American communities 400 years later can teach us about the unequal toll of epidemics. Researchers who study those outbreaks, and others, are uncovering how racism, oppression and poverty made a lie of the ‘equal-opportunity killer’. “The ways that social inequalities are manifested … put people at higher risk,” says historian Monica Green. “We should all be learning in our bones, in a way that will never be forgotten, why [the coronavirus pandemic] has happened the way it has.” (Science | 13 min read)

The Jackson Laboratory (JAX) in the United States has become a nucleus in researchers’ efforts to understand COVID-19 in mouse models. After a warning from a colleague in China, the lab rushed to produce stocks of transgenic mice using frozen sperm from SARS-susceptible animals developed by prescient microbiologist Stanley Perlman. JAX is also acting as an ark for carefully bred mouse colonies that scientists elsewhere were forced to cull when their labs closed. Lab leader and neuroscientist Cat Lutz describes the lab’s round-the-clock work. (Knowable | 8 min read)

Kari Stefánsson is the founder and CEO of deCODE, the genetics company that helped Iceland to test (for free) much of its population to help quash its outbreak. (Science|Business | 7 min read)

Basically Virtually everywhere they look, scientists are finding microorganisms living in porous rock deep underground, both on land and under the seafloor. Some estimates now put the number of subsurface organisms at around 1030 cells — an order of magnitude more than those living in soil, for example. Many of the microbes might not depend on photosynthesis, even indirectly. Instead, they could thrive on sources of energy such as hydrogen produced by naturally radioactive isotopes. Because energy is scarce, life down there is extreeeemely sssloooow. “It might take them 100 years or 1,000 years to divide just once,” says ocean ecologist Martin Fisk.

Andrew Robinson’s pick of the top five science books to read this week includes smart-technology spies, a final warning on the environment, and the staggering costs of cancer.

Microbiologist Elisabeth Bik’s observations are among the most revered (and feared) in science. Last year, she left her job to work full-time on spotting duplicated images in the scientific literature. Eschewing software, Bik relies on her natural knack for spotting repeated areas, and doesn’t shy away from sharing her suspicions on PubPeer and Twitter. Bik tells the Nature Podcast “Once you see those patterns, it’s really hard to not,” says Bik. “To see the same thing, over and over again in the same photo — sometimes it’s just hilarious.”

Bik estimates that her discoveries have led to at least 172 retractions and more than 300 errata and corrections. How would you fare? Check if you’re a super-spotter with the quiz in our accompanying feature. (Nature | 14 min read)

Jessika Trancik using an app she and her students developed, which provides information on vehicles’ carbon footprint. Trancik is an energy-systems researcher who studies how electric batteries might affect fossil-fuel use. Her findings help policymakers and have helped to guide the US delegation to the Paris climate negotiations. “It also helps those considering investing in carmakers, as well as engineers who are developing road networks,” she writes. (Nature | 3 min read)