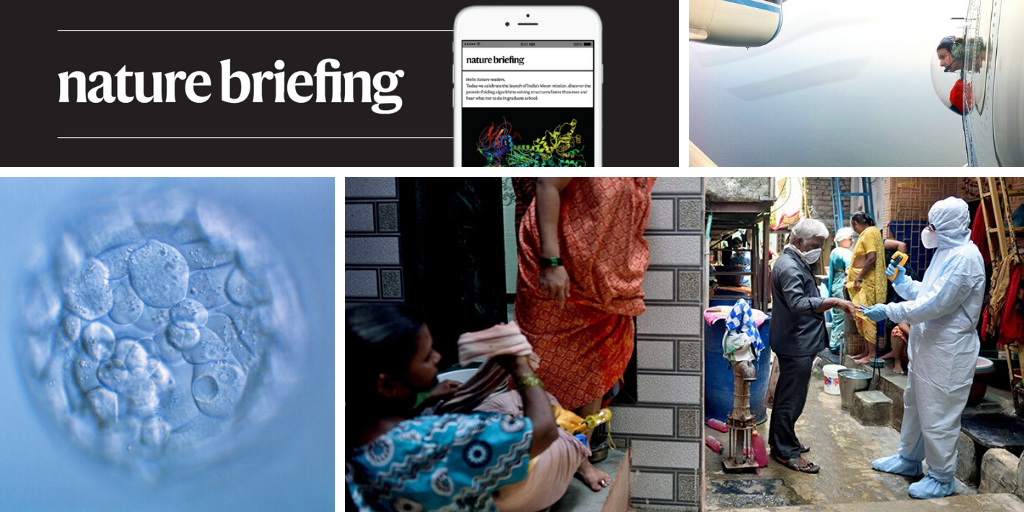 Three experiments that use the gene-editing tool CRISPR–Cas9 to modify human embryos have revealed how the process can make large, unwanted changes to the genome at or near the target site. These safety concerns are likely to inform the debate over whether scientists should edit human embryos to prevent genetic diseases — a process that is controversial because it would create a permanent change to the genome that can be passed down for generations. “If human embryo editing for reproductive purposes or germline editing were space flight, the new data are the equivalent of having the rocket explode at the launch pad before take-off,” says Fyodor Urnov, who studies genome editing.

A nearby red dwarf star is giving astronomers a glimpse at the sort of peaceful stellar neighbourhood where life might be able to survive. The star, called GJ 887, is remarkable because it is relatively peaceful and doesn’t emit flares or harmful radiation. It also hosts two planets that are a little more massive than Earth. “It’s the best star in close proximity to the Sun to understand whether its planets have atmospheres and whether they have life,” says astronomer Sandra Jeffers.

The US National Institutes of Health (NIH) this month published new guidelines for tracking sexual-harassment complaints involving scientists funded by the agency. The actions it will take when alerted to reports of unsafe behaviour include restricting scientists from peer-review panels and holding back pending grants. Advocates who have campaigned for changes at the agency say the rules are still weaker than those issued by other funding agencies, such as the US National Science Foundation.

Epidemiologist Jayaprakash Muliyil, who has been advising the Indian government, says that coronavirus infections are rising rapidly in the country, and the low death rate could be misleading. “The problem with death as an indicator is that a COVID-19 death has to be certified as such,” says Muliyil — which requires a test. “With a population of 1.3 billion, what do you think is the proportion of people that has access to this kind of testing? It is very low.”

The median age of residents testing positive for the virus in the US state of Florida, down from 65 in March — part of a worrying rise in infections among younger people in the United States. (The New York Times | 13 min read)

Pandemic politics highlight how predictions need to be transparent and humble, argue 22 scholars. They present five principles to help society demand quality modelling that invites insight, not blame. “We are calling not for an end to quantification, nor for apolitical models, but for full and frank disclosure,” they write. “Ignore the five, and model predictions become Trojan horses for unstated interests and values.”

Ask people to picture a scientist, and what do many imagine? All too often, the answer is: a white man in a white lab coat. The film Picture a Scientist shows why, writes reviewer Alexandra Witze. Systemic racism, sexual harassment and institutional bias permeate the stories of three female scientists — analytical chemist Raychelle Burks, biologist Nancy Hopkins and geoscientist Jane Willenbring — who have survived and thrived.

On a mission to understand the nature of chance, psychologist Maria Konnikova decided to master a game that “involves just enough luck and just enough skill to resemble the messiness of reality”. Konnikova told the Nature Podcast how poker can help people make better decisions — and is just what we need in these uncertain times.

Please take our first-ever postdoctoral-researcher survey. “We’re hoping to hear from postdoctoral researchers from around the world,” says Karen Kaplan, senior editor of the Nature Careers section. “These scientists help form the foundation of academic research, but they don’t always get the recognition they deserve. We’re eager to hear what they have on their minds, especially during these difficult times.” Everyone that responds has a chance to win £250 (US$310), or local equivalent.

There are only 400 or so North Atlantic right whales (Eubalaena glacialis) left, and biologist Christin Khan spends much of her time in a small, slow-flying aeroplane to track the fortunes of individual members of this endangered species. The work is dangerous, but also helps to give ships warning to slow down and avoid collisions. “I’ve devoted my whole career to this species and it’s hard to watch them careening towards extinction.” (Nature | 2 min read)

Physician and neuroscientist Kafui Dzirasa describes the emotional and intellectual toll of being a Black scientist in the United States. (Cell | 6 min read)