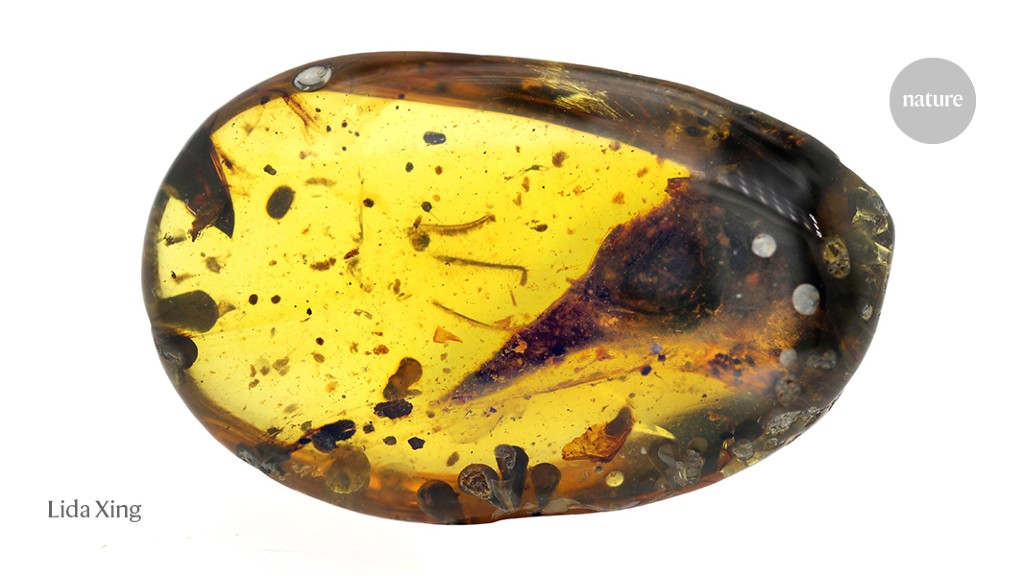 A high-profile paper that reported what was thought to be the remains of the smallest-known bird-like dinosaur has been retracted. New evidence suggests that the specimen, trapped in amber nearly 100 million years ago in what is now Myanmar, might actually be a lizard — part of a different group of reptiles.

The authors of the paper, published in Nature on 11 March, say that their original description of the fossil — a bird-like skull less than 2 centimetres long, its mouth packed with dozens of teeth — is still accurate (L. Xing, et al. Nature 579, 245–249 (2020); retraction http://doi.org/d4wn; 2020). But they acknowledge that its classification as a dinosaur is incorrect.

Scepticism about the specimen’s categorization arose almost immediately after the paper’s publication in March. In an as-yet un-peer-reviewed preprint posted on the bioRxiv server, some palaeontologists claimed that the fossil was a lizard, rather than a dinosaur (Z. Li et al. Preprint at bioRxiv http://doi.org/dq39; 2020). Another research team showed the authors of the original paper some unpublished data describing a similar fossil that the team had classified as a lizard. Those data have cast doubt on the original taxonomic classification, according to the retraction notice published in Nature on 22 July. (Nature’s news team is editorially independent of its journal team.)

The new data “do definitively say that we were wrong”, says Jingmai O’Connor, a palaeontologist at the Chinese Academy of Sciences Institute of Vertebrate Paleontology and Paleoanthropology in Beijing, who co-led the now-retracted study. But, she contends, the specimen cannot be reclassified until the other fossil data are published.

Although the fossil is no longer thought to be a dinosaur, O’Connor says, it is still compelling because of its unusual features. “The specimen is still very interesting to science,” she says.

Neanderthals might have had a biological predisposition to a heightened sense of pain, finds a first-of-its kind genome study (H. Zeberg et al. Curr. Biol. http://doi.org/d44b; 2020). Evolutionary geneticists found that the ancient hominins carried three mutations in a gene encoding the protein NaV1.7, which is involved in sensing pain.

The mutated version of the gene was found on both sets of chromosomes in three high-quality Neanderthal genomes, hinting that it was common across their populations.

The study also found that people who have inherited the Neanderthal version of NaV1.7 might experience more pain than others. About 0.4% of participants in the UK Biobank, a genome database of half a million people, had one copy of the mutated gene. Participants with this mutated version were about 7% more likely to report pain in their lives than were people without it.

The study’s authors caution that their findings do not necessarily mean that Neanderthals would have felt more pain than modern humans. Sensations conveyed by NaV1.7 are processed in the spinal cord and brain, which also contribute to the experience of pain.

Scientists and research advocates are disappointed with a historic €1.8-trillion (US$2.1‑trillion) budget deal reached on 21 July by European Union leaders to fund the bloc for the next seven years.

After a five-day summit of the European Council, EU heads of state agreed to give €81 billion to the upcoming flagship research programme Horizon Europe, which starts in 2021. But this is barely an increase over the previous programme’s budget and is almost €5 billion less than the European Commission — the EU’s executive branch — proposed in May.

Research advocates reacted with dismay. “This deal will cement Europe’s fall behind its global competitors in Asia and the US,” says Christian Ehler, the European Parliament’s spokesperson on research.

The EU’s long-term budget is set every seven years, and the latest round of negotiations covers 2021–27. This budget also includes a special €750-billion fund to aid recovery from the COVID-19 pandemic.

But the agreement is not the last word in the fight over research funding. The final figure will be decided in three-way discussions between parliamentary committees, the European Commission and national governments, using the council’s deal as a basis.