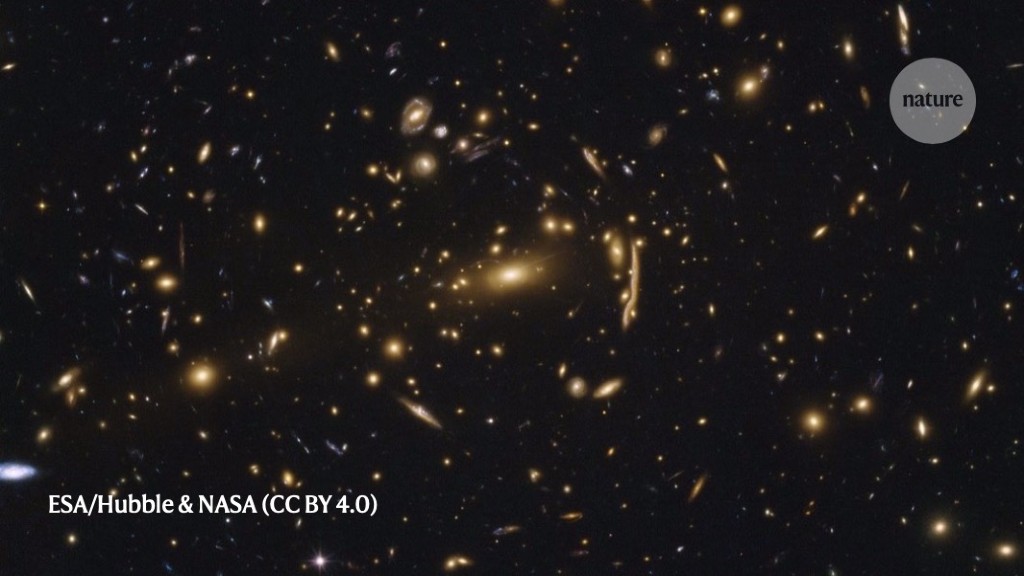 Examination of huge clusters of galaxies has revealed that dark matter — the invisible stuff that constitutes most of the Universe’s mass — forms more galactic-scale lumps than expected.

Massimo Meneghetti at the National Institute for Astrophysics in Bologna, Italy, and his colleagues surveyed 11 clusters that each contain around 1,000 galaxies and are massive enough to curve the light of more distant galaxies as it travels past them, making the distant galaxies look like long arcs when viewed from Earth. These ‘strong gravitational lenses’ had been imaged by the Hubble Space Telescope.

As expected, most of the lensing power was centred around the clusters’ middle regions, where dark matter forms a dense ‘halo’. But Hubble’s images also enabled a finer mapping, revealing dozens of smaller lenses — like “additional bubbles of little lenses”, says co-author Priyamvada Natarajan at Yale University in New Haven, Connecticut. These ‘subhaloes’ were more numerous, and their lensing was on average ten times stronger, than predicted by computer simulations of clusters formed according to existing theories of dark matter, the authors write.

Rare Event: Hurricane-Like Storm in the Mediterranean Makes Landfall in Greece
The COVID Covenant: Going big is the price of admission
Stealing Design Secrets from the Unexpected Master of Origami
How helping my international students succeed helped everyone
Dark Matter Is Even Stranger Than We Thought | SciShow News