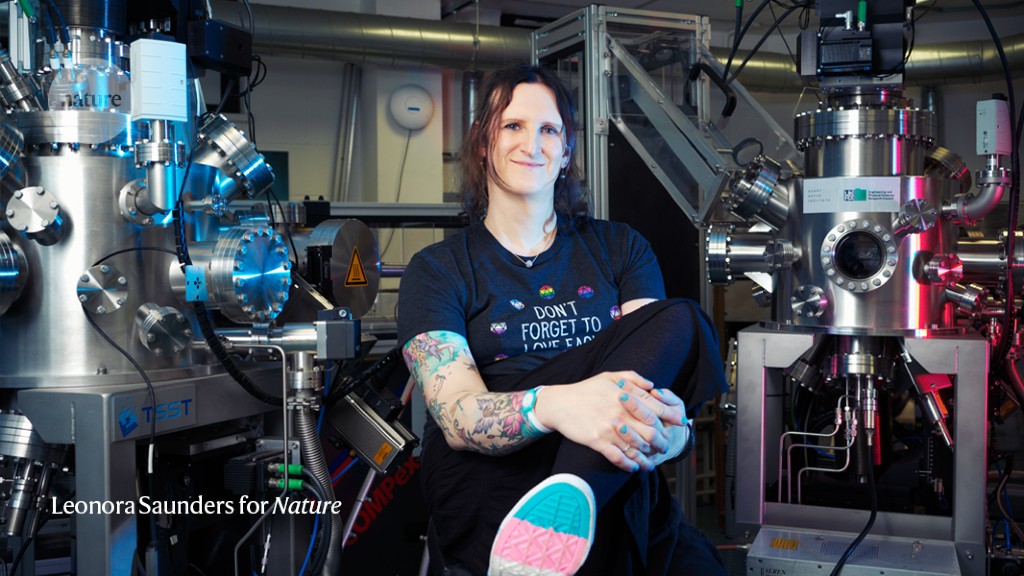 I’m a thin-film materials scientist and manage the Centre for Applied Superconductivity at the University of Oxford, UK. As you can see from the sole of my shoe, which is decorated with the transgender pride flag, I’m a trans scientist. I’d long believed that coming out as transgender would be career-ending. Instead, Oxford was the first place where I could be myself, where I’ve enjoyed being in the laboratory, because I was no longer pretending or hiding — I was accepted for being me.

We are making new superconductors, which are materials that conduct electricity without resistance at extremely low temperatures. This means that they can carry a current indefinitely without losing energy in the form of heat or light. Superconductors are widely used in magnetic resonance imaging machines, and at the Large Hadron Collider at CERN, Europe’s particle-physics lab near Geneva, Switzerland.

Here, I’m in our lab, surrounded by pulsed-laser deposition machines, which we use to make thin-film superconductors. We hit composites of copper, barium or calcium with a high-power laser beam and knock some of the atoms off. Those atoms travel through a vacuum and collect on a surface, forming a thin film. We are always trying to produce superconductors that can generate higher magnetic fields than has previously been possible.

What’s most inspiring about our lab is the people I work with: they accept me and treat me as a scientist, so that I can just focus on my work. Since I came here in 2015, Oxford has given me a platform for me to share my story as a trans scientist through talks and articles. It’s such a privilege and an honour to have that visibility.

And it’s important that we make the lab a place where everyone can be themselves. If we allow that to happen, scientists are going to do their best work. As my T-shirt says: “Don’t forget to love each other.”

How High Can We Build?
Waste: an environmental justice issue we should be talking about
Brain maps show how empathetic mice feel each other’s pain
Elon Musk, Now The World’s Wealthiest Person, Is Focused On Helping Humanity
A pair of whirlpools delicately move an embryo — contact-free