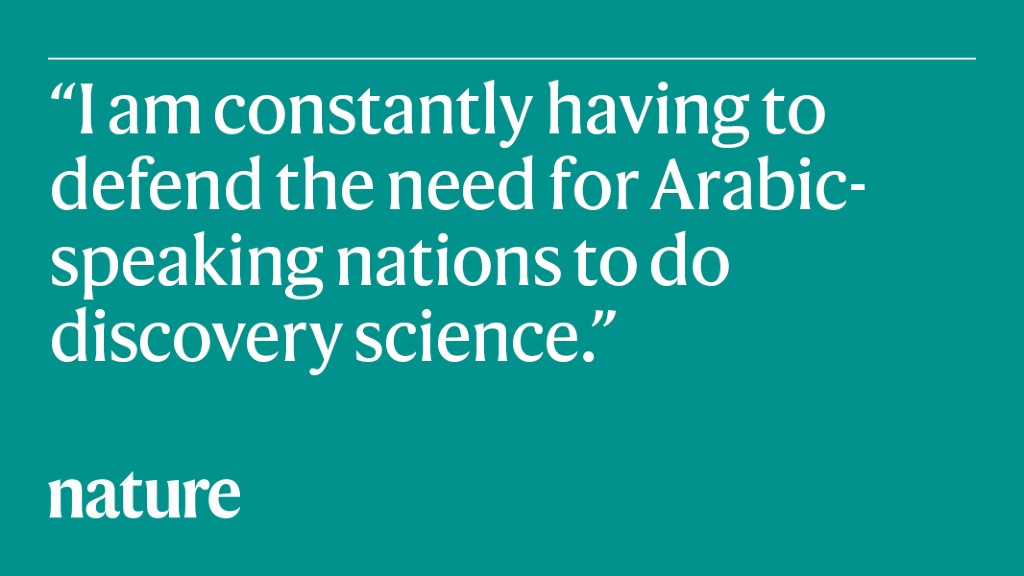 The United Arab Emirates (UAE) has boldly joined other space-faring nations with its Hope orbiter mission to Mars, which launched in the early hours of 20 July. It planned and executed the mission in just six years — a fantastic achievement that has gripped the region.

But now, all the Arab world’s universities must be ready to run with the baton that Hope is handing to them. Currently, the overwhelming majority of the young people who watched the launch on their smartphones and decided on a career in space science will have to study abroad, because the Arab world largely lacks the capacity to educate them in astrophysics or space science.

At present in the 22 member states of the Arab League, there are no more than 4 full-time undergraduate programmes in astronomy, space science or astrophysics, and even fewer postgraduate ones. As a professor of physics and astronomy, I am used to seeing the majority of my students leave the country to pursue higher studies, and these are mostly in the applied sciences, rather than in basic sciences such as astrophysics. If the legacy of Hope changes that, it will be an even greater and longer-lasting achievement than reaching Mars and conducting high-quality research there.

Earlier this month, I took part in a panel discussion entitled ‘Why spend money on space science?’ at the Research and Innovation Summit run by the Phi Science Institute in Amman, Jordan. The focus was the Arab world. It wasn’t the first such discussion and it won’t be the last. Although Hope has energized this region in a way that no non-political event has done in recent memory, I am constantly having to defend the need for Arabic-speaking nations to do discovery science — research with no direct application or material benefit. Far from settling this argument, the Hope mission has reignited it. Even when I point out that the budgets for space projects pale in comparison to military budgets or personal luxury spending, the response I get is that two wrongs don’t make a right.

If we are to expand astronomy and the space sciences in our universities, this argument will need to be engaged with.

US president John F. Kennedy’s 1962 “we choose to go to the Moon because it’s hard” speech, and the Moon landings that followed, inspired thousands of Americans to go into science. Indeed, UAE Prime Minister Mohammed Bin Rashid Al Maktoum channelled Kennedy’s spirit when he said in 2014: “We chose the epic challenge of reaching Mars because epic challenges inspire us and motivate us. The moment we stop taking on such challenges is the moment we stop moving forward.” If the Hope orbiter reaches Mars, it will be a big leap forward in a region where careers in the military or the public sector — which are better paid than academic or private-sector science — are often the preferred choice for the region’s young people.

The Hope team must be credited with establishing many outreach and engagement programmes. The members are visiting schools to encourage students to think about pursuing careers in space research and technology, or in other sciences. And they are doing much to engage both conventional and social media. This is important, but much more needs to be done with universities and research centres. Now that six Arab countries have established space agencies, it should not be beyond their ability to create university departments in both applied space science, such as remote sensing, and astrophysics.

To complement that, every Arab country should have, at the very minimum, one astronomical observatory for students and researchers to use locally1,2. The Arab world has not set up a new telescope of more than 1 metre for more than 50 years — although smaller ones of 50 centimetres have recently been built.

Research-class observatories are not very expensive, with costs in the range of a few tens of millions of dollars to set up. But they produce much science, as the recently built Oukaïmeden Observatory in Morocco has shown3. Researchers there took part in the discovery of an exoplanetary system with seven Earth-sized planets4; have reported discoveries of comets and near-Earth asteroids3, and helped to characterize the interstellar comet Borisov5, which passed through the Solar System in 2019.

The UAE’s Hope mission to Mars can be truly transformative, but for this to be achieved fully, we need to build a strong network of discovery science and education throughout the Arab world. Let us use this historic opportunity to build space-science capacity in universities, observatories and research centres, and encourage everyone — Arabs in particular, but non-Arabs, too — to play an active part in showing students and young scientists in the region that the sky is not the limit.