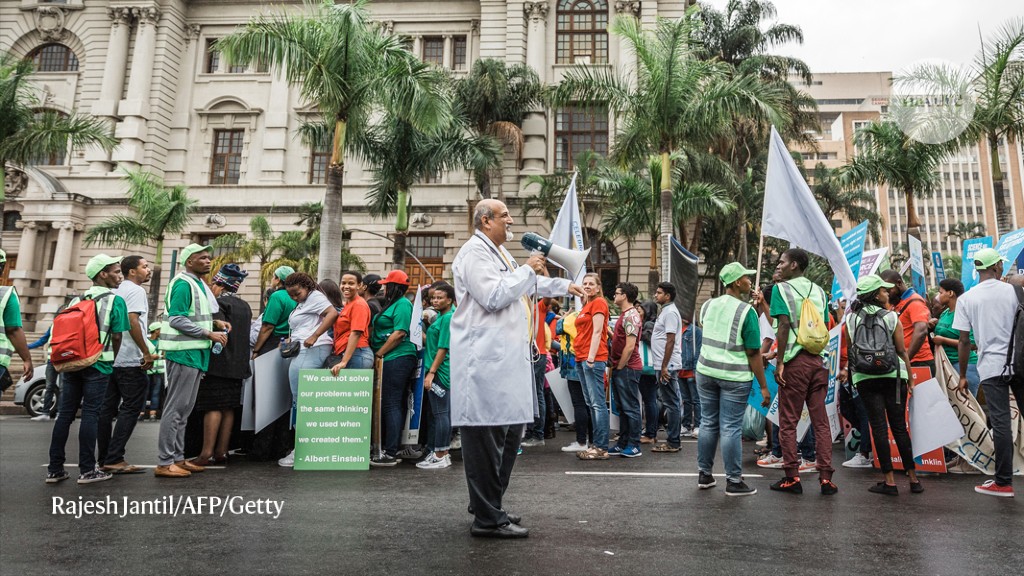 From the coronavirus pandemic’s first months, the World Health Organization warned that Africa’s health systems would struggle to cope if the virus began to spread on the continent. That prediction is starting to be realized, as Nature has reported from Guinea, Liberia and Sierra Leone. But more than half of the continent’s 780,000 reported cases are in South Africa.

Initially, a hard five-week lockdown from 27 March helped to keep numbers low, but that became economically ruinous as 3 million South Africans lost their jobs. The official death toll stands at 6,000, but as with other countries, this is likely to be an undercount, according to the South African Medical Research Council.

The government had been easing restrictions to restart the economy, but has again closed schools for four weeks. Health minister Zweli Mkhize has urged citizens to admonish family and friends who are not adhering to social distancing, mask-wearing or hand washing.

Nature spoke to Salim Abdool Karim, an epidemiologist and chair of the health ministry’s scientific advisory committee. A veteran of the AIDS crisis, Karim talks about his hopes and fears, and why he thinks South Africa’s ubuntu tradition — of communities looking out for each other — is key to the country’s response.

South Africa’s present situation looks dire. How did the country get here?

We had our first case on 5 March. In the first three weeks after that we had a rapidly growing epidemic; the cases were doubling every two days. We were on the same trajectory as the United Kingdom at that time. By declaring a state of disaster, closing the country’s borders, and implementing the lockdown on 27 March, we slowed the transmission to a doubling time of 15 days. We didn’t have the early peak that countries like the United Kingdom had. If we hadn’t implemented these measures, we would have had the situation we have now back in April.

How much worse is it likely to get?

Since there are communities in South Africa where social distancing and frequent hand washing is not feasible, mainly in informal settlements, I am expecting the number of cases to rise substantially, possibly exceeding a million. I thought that this would occur within 2–3 months of the first case.

What surprised you about how slowly the epidemic was progressing?

I expected the epidemic to take off big time in Gauteng [a small, densely populated province that includes Johannesburg and Pretoria] in late April as we eased the lockdown. Gauteng has so many travellers, so much density — this is the New York of Africa. I was completely wrong! Instead, the first large outbreak was in Cape Town. But we always thought that when it eventually did hit Gauteng it was going to grow, and that’s what we’re seeing now. The president is talking about a “storm” — we are seeing 5,000 to 6,000 new cases in Gauteng per day. Even so, our epidemic is smaller than I thought it would be by now. I had thought that by May, we would be reaching serious numbers.

To what extent was the slow spread due to ‘exceptional’ factors such as Africa’s young population, or its climate? Or is it a result of limited testing?

I never believed that Africa was exceptional. But I don’t have the answer. There is no reason why this epidemic should not have spread faster in some countries, such as Nigeria. Some people say it’s because those countries don’t test enough. But even if you don’t test, you still will see an increase of hospital admissions and deaths. So that’s not the real reason. At the moment, it’s an enigma. The reason will reveal itself in due course.

The South African government, like many others, says it locked down to buy time to prepare the health system, rather than to stop the virus from spreading. Is this true?

Yes, the primary goal of the South African COVID-19 response is to slow the spread of infections to enable the health system to prepare and cope better. This would not necessarily equate to fewer infections. Containment was still on the table early on, but it was a long shot. We didn’t really think of it as a realistic option. Of course, we hoped South Africa would end up having some ‘mojo’ that would protect it better than other countries. But the reality of South Africa dictates otherwise. Large parts of our country do not have the ability to institute social distancing and for people to wash their hands regularly. So, we had to plan that we would not be able to contain it, while hoping that we would. But when I presented the likely scenario to politicians and later to the public around Easter, I explained that we had to face “a difficult truth” — that we were not likely to be able to contain the virus, and that the spread would probably rise exponentially as we eased lockdown restrictions. It was really difficult to say that to the entire nation.

There is a better relationship between science and politics now, it’s been very different. Neither Cyril Ramaphosa [South Africa’s president] nor the people we deal with like Mkhize ever denied that this was a serious issue. They wanted to hear what we thought, they drew on our experience. But they were making their own decisions. We are advisers, and they make the calls.

Are you worried that South Africans might not get access to new COVID-19 treatments and a vaccine, if and when one is developed?

I had hoped we would be more involved in developing Covid-19 vaccines in South Africa. We have the capacity, built from HIV where we are front runners. The reason I say this is that when you play a leading role like that, you have a seat at the table where decisions are made about the vaccine, and its distribution. Unfortunately, because we came to the epidemic late — it had already been through China, Europe, North America — we have had to take a supporting role in vaccines.

We would just have added one more vaccine candidate, and there are lots already. So, without a seat at the table, we will always be at a disadvantage and we’ll have to wait our turn. The way things are going right now, the US is probably going to want to take the first 200–300 million doses and then leave the rest for the rest of the world to distribute equally. It is good to know that the World Health Organization is facilitating this process.

We are ‘building the ship as we are sailing it’. This virus exposes the fault lines in our society. But I think when we get to a point where sufficient numbers of people have a relative, or family member, or someone in their neighbourhood who has been sick or died from the virus, individuals are moved to collective action so that they can stand united again. When the problem didn’t seem so serious, when the lockdown slowed transmission, people questioned the restrictions as those of a nanny state. But I think we are going to realize pretty soon that the best protection we have from this virus is ubuntu — a South African word that means ‘I am because you are’. I am safe because you are safe. I saw that in HIV, when people saw the deaths of those close to them, it pushed a change in behaviour. We as a country are built on the principle of ubuntu. We have to rediscover that, or we won’t defeat this virus.

Catching a Human With a Giant Glue Trap! | MythBusters Jr.
‘We’re in one of the cataclysmic times of change’: first female NSF director on discrimination and COVID-19
While some techies flee Silicon Valley, this Waymo engineer is doubling down and running for office
Tesla paid almost $100 million for Gigafactory Texas land in Austin
With Thompson’s nomination, U.S. Space Force leadership takes shape