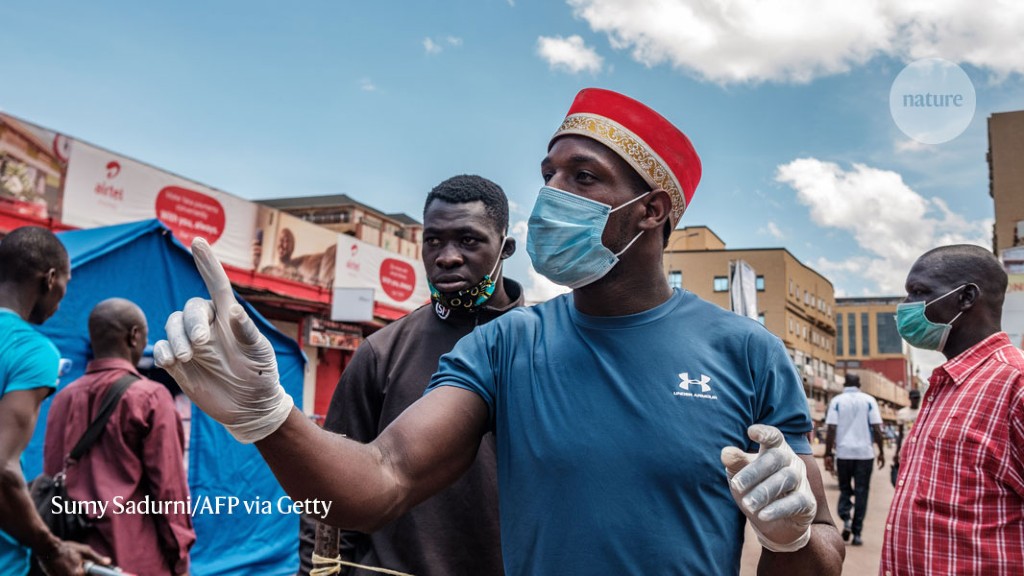 In February, Moses Joloba, a Ugandan microbiologist who usually works on tuberculosis diagnostics, received an unusual offer from a collaborator in the United States.

At the time the offer was made, sub-Saharan Africa had few coronavirus cases, and Uganda — a country of 43 million people — had already set up a coronavirus testing laboratory, at the Uganda Virus Research Institute in Entebbe. So Joloba turned down the offer. But after the country identified its first case, on 21 March, the government announced an ambitious programme of quarantine, testing and contact tracing, and demand for test kits and laboratory capacity skyrocketed.

With the whole world clamouring for supplies, Joloba wrote back to his US colleague, who responded by sending enough chemicals for 20,000 test kits. “Although the supplies took about ten days to arrive, it was one of the fastest ways to get equipment,” Joloba recalls.

As in much of the rest of the world, many researchers in Africa are pivoting to coronavirus work. But they are also having to leverage their global scientific connections to source know-how and supplies. That’s because wealthier countries also need this equipment to deal with their own outbreaks. Last month, John Nkengasong, director of the African Centres for Disease Control and Prevention in Addis Ababa, wrote in Nature about how African countries are being priced out of the market for coronavirus diagnostics.

Exports of some types of personal protective equipment from the United States need authorization from the Federal Emergency Management Agency. But there are no restrictions on exporting coronavirus test kits. In spite of this, Joloba’s US collaborator Henry Boom, CWRU’s head of infectious-disease research, faced criticism from some at home who felt the gift was eating into Ohio’s own testing capacity. Boom says the university didn’t send test kits — only primers and probes that weren’t scarce. “We did not deprive anyone of testing in the US,” he told Nature. The gift turned out to be a significant boost for Uganda. As of 10 May, Joloba’s lab had carried out more than 14,000 tests — just under one-quarter of the country’s then total of 63,559.

The United States is not alone in controlling access to some medical supplies. The European Commission has also asked member states to limit exports of some protective equipment. France has issued a list of medicines — including remdesivir and hydroxychloroquine, which are being tested as possible coronavirus treatments — that cannot be exported.

But global links between researchers are helping some supplies to get through. Before COVID-19, Gordon Awandare led research teams studying malaria, tuberculosis, HIV/AIDS and other diseases at the University of Ghana in Accra. His lab is now sequencing SARS-CoV-2 genomes from people in Ghana. And some of his staff have moved to the nearby Noguchi Memorial Institute for Medical Research, which is doing the bulk of the country’s coronavirus testing.

Awandare and his team are able to conduct sequencing because colleagues at institutions in the United Kingdom have sent him hard-to-come-by chemicals, such as reagents and primers. These supplies would take three to six months to arrive through normal procurement channels, he says. “With the help of [international] collaborators, it takes two to four weeks,” Awandare adds.

He is also about to receive 2,000 coronavirus-antibody test kits from the University of Edinburgh, UK. These will be used to measure immunity levels in Accra, and are part of a multi-country project to validate the test while measuring infection rates in African populations.

South Africa is sub-Saharan Africa’s second-richest country, after Nigeria, and has the continent’s highest COVID-19 case load, with around 23,600 infections reported as of 26 May. There, too, research links are an essential tool for sourcing materials such as protective gear for medics, test kits and experimental drugs, says Daan du Toit, who runs international cooperation at the government’s Department of Science and Innovation. “The networks and personal relations fostered through them over many years [are] playing a crucial role to facilitate access to materials,” he says.

That’s a lesson from the early days of the country’s ongoing HIV epidemic, says Glenda Gray, president of the South African Medical Research Council in Cape Town. As infections and deaths began to climb rapidly in the 1990s and early 2000s, South Africa’s government claimed it could not afford to subsidize newly developed antiretroviral drugs — although one of the reasons for this resistance was a belief among leading politicians that HIV did not cause AIDS. Internationally funded research programmes could get around these barriers, and, at first, it was through them that South Africans with low incomes could access the lifesaving drugs.

The close links between HIV research and the rollout of antiretroviral drugs in South Africa meant that doctors who were involved in research programmes became the most skilled at managing the disease, Gray says. She thinks that this will happen with COVID-19, too.

The researchers interviewed for this article were keen to point out that international links do not diminish the importance — or the existing work — of national research organizations. Research done locally is also essential to building confidence in new treatments among the public and the medical community, says Soumya Swaminathan, chief scientist at the World Health Organization in Geneva, Switzerland.

Back in Kampala, Joloba’s lab is using its gifted test kits to carry out Uganda’s first survey of community transmission of the coronavirus. The country’s early lockdown has kept case numbers low, and most people found to be infected have been travellers or truck drivers from neighbouring countries. But to start to ease the lockdown, the government needs to know transmission levels with greater precision. Through its testing, the Makerere lab is starting to reveal hotspots of infection.

And in Accra, Awandare hopes that scientists’ role in the coronavirus response will convince African governments to increase their funding, so that the next time there is a disease outbreak, they can act more independently. “We hope that this will create lasting impressions on the politicians, so that after the pandemic is over they will remember to invest sustainably in science,” Awandare says.

The Quest to Find Signs of Ancient Life on Mars
A Space Odyssey: Britain Rockets Into Unknown With OneWeb
AMC shares surge after WSJ report that the company is working on deal to avoid bankruptcy
5 things to know before the stock market opens Monday
UK pledges £3 billion to make economy greener, but environmental groups say it isn’t enough