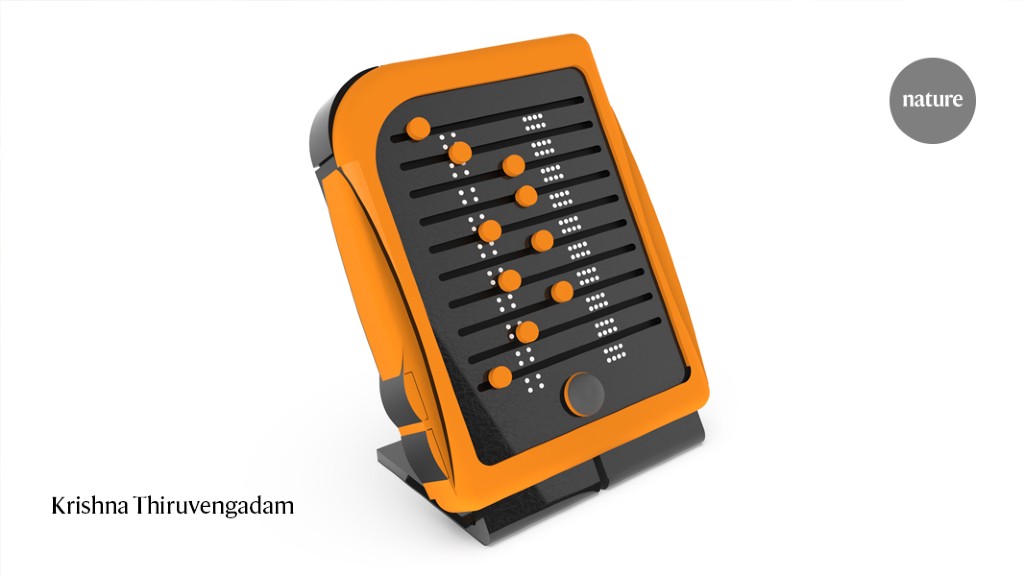 “Technology is now essential to the lives of blind people, yet many computer programs and devices aren’t universally accessible,” says Jo Fullerton, Technology for Life Coordinator at the Royal National Institute of Blind People in Edinburgh, UK.

While pursuing a master’s degree in integrated product design at Delft University of Technology in the Netherlands, Krishna Rajagopal developed a tool that he thinks can help. CuriO combines auditory and tactile stimuli to make coding accessible to people with visual impairments.

“CuriO brings an exciting new perspective to programming. For the first time, blind developers have the choice of a multimodal device that could make programming quicker, easier and more efficient,” says Parham Doustdar, a software developer at the trip-planning website, Booking.com, who is completely blind.

Nature spoke to Rajagopal, now based in Chennai, India, to learn what makes CuriO tick.

Why did you develop CuriO?

Coding has become an essential skill of the modern world, and many employers need skilled programmers for a wide variety of roles. Although many people with limited vision aspire to code just as their sighted counterparts do, they don’t have equal opportunities. That’s especially true in India, where I’m from, and other developing countries. I aimed to design an affordable and accessible tool that could close the gap, opening up lucrative careers to the visually impaired community.

How does CuriO work?

CuriO allows blind and partially sighted users to navigate and skim programming code. When code is written using an external keyboard, or is loaded into CuriO’s text editor, on-screen visual elements, such as code structure and hierarchy, are translated into a pattern of moving buttons organized in rows on the device. Each row represents a line of code, and the position of the button indicates indentation. As the user navigates the code using a joystick, button positions update in real time. By pressing certain buttons, users can hear specific characters, words, lines or pages read aloud. This allows users to correctly place the cursor for debugging.

CuriO is compatible with Python, Java, Javascript and C++ code, and runs on Linux.

How is CuriO different from other products?

What sets CuriO apart is its multisensory approach to programming. Products available to visually impaired programmers are typically limited to screen readers and refreshable Braille displays. Unfortunately, screen readers are designed to read natural language rather than source code; and Braille displays are expensive and not widely accessible owing to a decline in Braille literacy. I designed an interface that combines touch and sound to make coding easier.

In January, I brought the prototype to the I-Stem Confluence, an event in India that showcases accessible products designed for scientists, technologists, engineers and mathematicians. At this year’s conference, which welcomed around 120 delegates to Bangalore, four visually impaired developers took CuriO for a test drive. I’m now looking to collaborate with industry experts to bring it to market.

The Story Behind How Coronavirus Slashed Carbon Emissions
With an active hurricane season on the way, officials prep disaster plans for coronavirus challenges
When will we get haircuts again? Beauty experts weigh in on the future of self care
NASA renames WFIRST space telescope after pioneering woman astronomer
Colourful bilayer paint can cool buildings by reflecting sunlight – Physics World