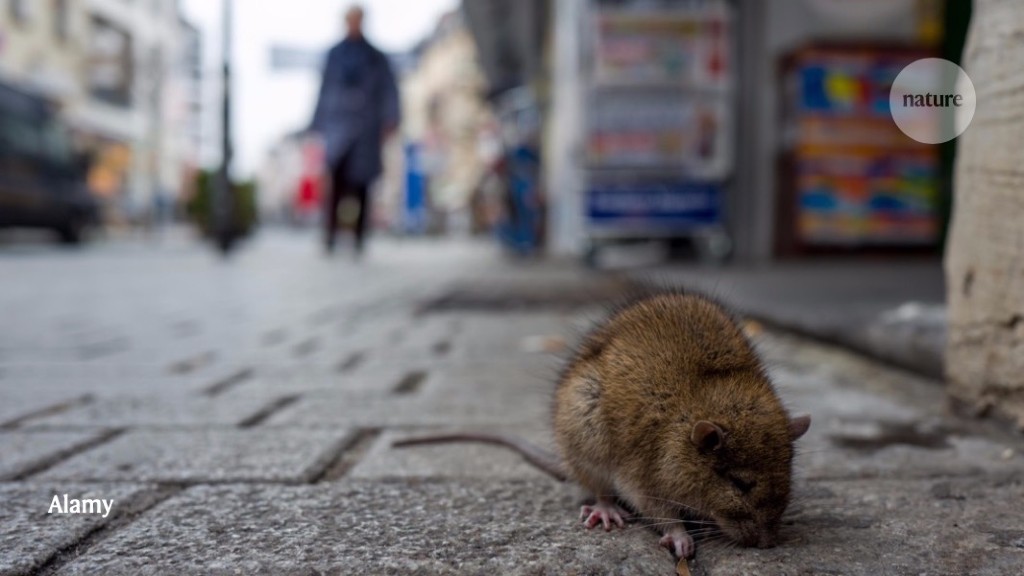 Humans have altered more than half of Earth’s habitable land to meet the needs of our burgeoning population1. The transformation of forests, grasslands and deserts into cities, suburbs and agricultural land has caused many species to decline or disappear, whereas others have thrived2. The losers tend to be ecological specialists, such as rhinoceros or ostriches, that have highly specific feeding or habitat requirements and that are comparatively larger, rarer and longer-lived than are non-specialists. The winners are often generalists that are small and abundant and that have ‘fast’, short lives, such as rats and starlings. 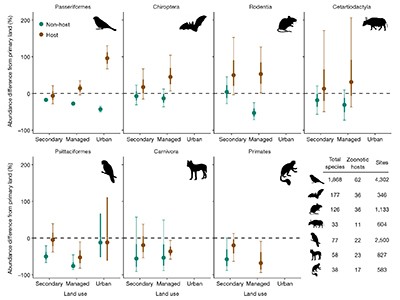 Writing in Nature, Gibb et al.3 show that, worldwide, these winners are much more likely to harbour disease-causing agents (pathogens) than are the losers. As a result, when we convert natural habitats to our own uses, we inadvertently increase the probability of transmission of zoonotic infectious diseases, which are caused by pathogens that can jump from animals to humans.

Examples of how land-use change increases the risk of zoonotic disease have been accumulating for decades. For example, rodents that amplify the abundance of pathogens that cause Chagas disease, several tick-borne illnesses and a suite of what are termed hantaviral diseases thrive in human-dominated landscapes where other species have been lost4. But the generality of this pattern, and the specific mechanisms that underlie it, have been questioned5.

Gibb and colleagues had to overcome two obstacles in investigating whether, at a global scale, human-caused changes to ecosystems favour vertebrate species that are most likely to cause illness. One challenge was determining which animal species tend to disappear and which tend to thrive, along a gradient from undisturbed, natural habitats to the most human-dominated areas. The authors accomplished this using the database of the PREDICTS project (Projecting Responses of Ecological Diversity In Changing Terrestrial Systems). It contains more than 3.2 million records from 666 studies that counted animals along land-use gradients around the world6.

The second hurdle was determining which of these species harbour pathogens that can infect humans. To do this, Gibb et al. compiled information from six databases that report host–pathogen associations. They found 20,382 associations between 3,883 vertebrate host species and 5,694 pathogens. Unfortunately, finding that an animal and a pathogen are associated does not necessarily indicate that the animal can transmit the pathogen to humans or other animals. Recognizing this, Gibb and colleagues used more-stringent criteria to ascertain host–pathogen associations, including determining whether there was direct evidence of the pathogen existing in the host, and of the host’s ability to transmit the pathogen.

The patterns that the authors detected from these analyses were striking. As human-dominated land use increased, so did the total number of zoonotic hosts, whereas the total number of non-hosts declined. In more intensively used areas, both the number of host species and the number of individuals of those species increased, with the latter effect being the stronger of the two. The abundances of rodents, bats and songbirds increased notably in human-dominated sites (Fig. 1). The effect on the abundances of carnivores and primates was more modest. However, host species could be misclassified as non-host species if a lack of in-depth research effort resulted in a failure to detect zoonotic pathogens. To take this into account, Gibb et al. incorporated a statistical process called bootstrapping into their analysis. This allowed them to reclassify non-hosts to host status using an approach that included the amount of published research on the species. Their conclusions using this approach remained the same.

The COVID-19 pandemic triggered by a coronavirus of animal origin has awakened the world to the threat that zoonotic diseases pose to humans. With this recognition has come a widespread misperception that wild nature is the greatest source of zoonotic disease. This idea is reinforced by popular-culture portrayals of jungles teeming with microbial menaces, and by some earlier scientific studies7,8. Gibb et al. offer an important correction: the greatest zoonotic threats arise where natural areas have been converted to croplands, pastures and urban areas. 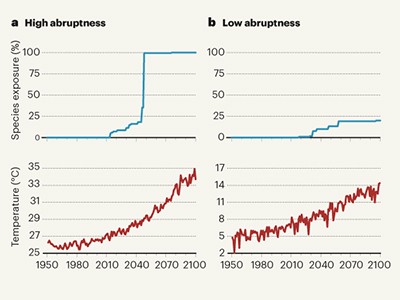 Is it simply a coincidence that the species that thrive in human-dominated landscapes are often those that pose zoonotic threats, whereas species that decline or disappear tend to be harmless? Is the ability of animals to be resilient to human disturbances linked to their ability to host zoonotic pathogens? Gibb et al. found that the animals that increase in number as a result of human land use are not only more likely to be pathogen hosts, but also more likely to harbour a greater number of pathogen species, including a greater number of pathogens that can infect humans.

Using a different approach to address the same general questions, a recent study9 found that mammals that are increasingly widespread and abundant carry more zoonotic viruses than do mammals that are declining, threatened or endangered. These observations support previous research that documents a trade-off between the high reproductive rates associated with ecological resilience and the high immune-system investment associated with lower pathogen loads10. In other words, creatures that have rat-like life histories seem to be more tolerant of infections than do other creatures. An alternative, although not mutually exclusive, explanation is that generalist pathogens, which are more likely to spill over into new hosts, tend to adapt to target the hosts they are most likely to encounter over evolutionary time11. These hosts are the rats, and not the rhinos, of the world.

The analyses by Gibb et al. and others9 suggest that restoring degraded habitat and protecting undisturbed natural areas would benefit both public health and the environment. And, going forward, surveillance for known and potential zoonotic pathogens will probably be most fruitful if it is focused on human-dominated landscapes.

EGEB: Wells Fargo, JPMorgan Chase are lead fracking funders
Why nature is the next frontier for sustainable business
These electric cargo bikes are already replacing trucks in cities
EPA Denies Claims That Chlorpyrifos Pesticide Affects Brain Development
Coal Dropped from 26.9% of US Electricity to 17.7% in 3 Years