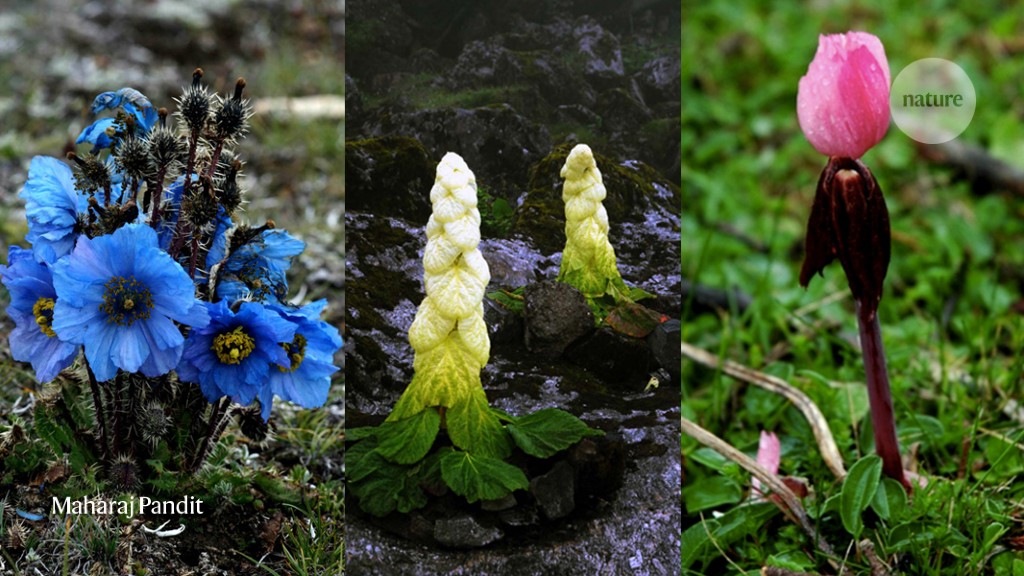 Thirty-five years ago, at the beginning of my research career, I walked for weeks to study populations of the endangered Himalayan goldthread or mishmi teeta (Coptis teeta), an endemic plant in Arunachal Pradesh in the Eastern Himalaya that is used as a potent antimalarial drug by local communities. Himalayan species are intriguing. Like isolated islands, mountain peaks reveal how evolution works: by knowing where unique species concentrate, we can learn how speciation occurs.

It would be hard for researchers across Himalaya to do research treks today. Hundreds of thousands of soldiers are now stationed across the high Himalaya. Mid-June saw the worst clash in 45 years, when India–China disengagement talks were followed by a fatal brawl that left at least 20 people dead, several from falls into a river gorge. It is the latest episode in a border conflict between two nuclear powers, and it is happening in a unique, fragile ecosystem.

The Himalaya, which straddles seven nations, already has one of the world’s highest rates of deforestation as a result of logging, agricultural expansion, a burgeoning human population, and the building of dams and other infrastructure. It is also thought to be the most rapidly warming mountain range on Earth. Alongside the animal species, Himalayan alpine meadows boast a wealth of herbaceous flowering plants — strange, colourful and delicate — often with medicinal properties. Nowhere else are so many native plant species found at such high elevations.

I have been studying this region for decades, mainly investigating the effects of dams, deforestation, land-use changes, conservation and policy. Roads and buildings to accommodate troops are encroaching on this fragile territory. Pangong Tso Lake, at an altitude of 4,280 metres, saw a military face-off in May. It is only one of many unique Himalayan ecosystems under boots. The lake is a specialized saline water body surrounded by alpine meadows. Militarization, land-use changes, and habitat destruction and fragmentation across the Himalaya are likely to push several species with small populations to extinction. Diplomacy is their only hope.

Here is my idealistic aim for this region. Alongside other multilateral strategies, the mountain range, or at least those areas between 2,600 and 4,600 metres high — whose famous inhabitants include the snow leopard and its prey, the Himalayan blue sheep — should be designated a nature reserve. I propose calling it the Himalaya-one-Nature-one-Reserve, or HONOR. It would ideally encompass much of the Himalayan biodiversity hotspot in the Eastern and Western Himalaya, about 740,000 square kilometres.

My dream is not as far-fetched as it sounds. In Antarctica, the Ross Sea Marine Protected Area covers more than 1.5 million square kilometres under a 25-nation agreement. The largest land-based protected area, Northeast Greenland National Park, is 972,000 square kilometres.

I am also inspired by other conservation efforts. The Mekong River Commission includes the governments of Cambodia, Laos, Thailand and Vietnam. A similar Himalayan River Commission, involving all the Himalayan head-water and downstream nations, needs to be explored. In the Himalaya, fledgling transnational conservation efforts and proposals, such as the Kailash Sacred Landscape Conservation and Development Initiative, and the Kangchenjunga Landscape Conservation and Development Initiative, should be ratified and strengthened.

These ideas need to be on the table now, while tensions are so alarmingly high. None of the Himalayan countries wants war, so some sort of stand-down will happen — and conservation should come into the discussions. There is a de-facto code for military engagements at this border to avoid the use of firearms. Surely, not building more infrastructure is as feasible as soldiers not using guns.

The military infrastructure built so far in fragile parts of the Himalaya includes tens of thousands of kilometres of roads. The Chinese-backed US$75-billion China–Pakistan Economic Corridor is a 3,000-kilometre-long route comprising roads, a railway and oil pipelines. India’s Border Roads Organisation has been empowered to build 3,400 kilometres of strategic border roads, 61 in total, to cater for far-flung communities, pilgrims and border security.

Transporting fuel to inaccessible terrains to melt bitumen for the road surface is expensive and arduous. Woody plants such as rhododendrons, oaks and conifers, including extremely slow-growing shrubs such as Juniperus, are regularly used as fuelwood. A Belt and Road initiative of the Chinese government, which India is not involved in, passes through the most fragile Himalayan landscapes.

As the grasses and herbaceous plants disappear from these alpine valleys, so will a way of life. With no public health-care system, imperilled medicinal herbs are the only source of community medicine, and the only source of cash for highland marginal communities. The semi-domesticated yak in the Himalayan highlands, on which the people depend, cannot graze on the shrubs that are fast invading the meadows under the impact of global warming.

I dream instead of the Himalayan highlands transformed into a peaceful nature reserve, and that the huge public funds squandered on managing conflict are invested instead in infrastructure for health care, education, conservation and welfare. Perhaps this vision will inspire those urgently trying to bring peace to the roof of the world.