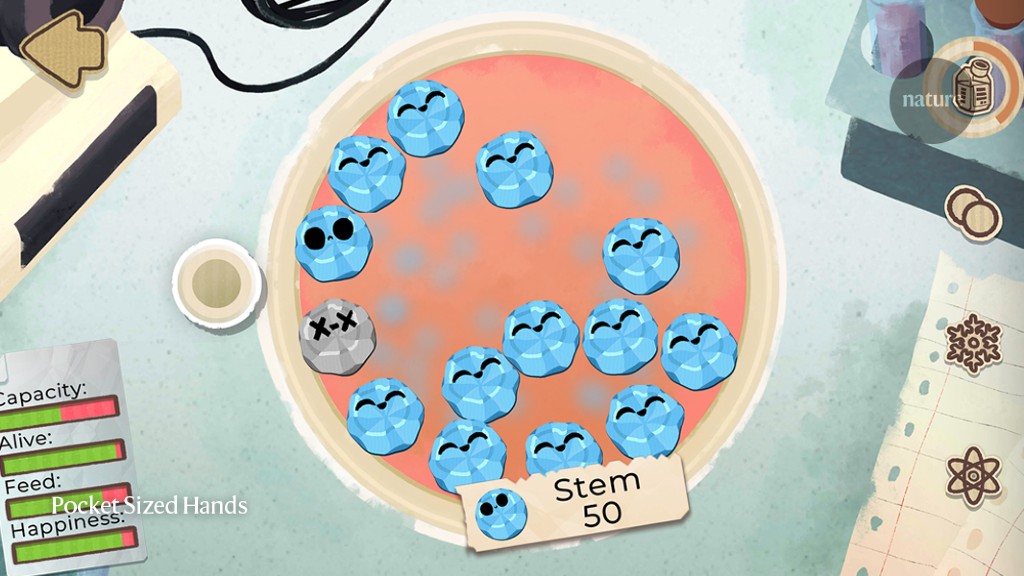 My phone buzzes and asks me to check on my cells: “They are not looking too happy”. I move my finger to the corner of the screen and issue the instruction to feed a cluster of cartoon-blue stem cells. They giggle and smile up at me. I lock my phone. I’m in isolation, at home and far from the laboratory, because of the global pandemic. But I can still play my life as a scientist on the app game I have co-created with sociologists at the University of Cambridge, UK.

Dish Life: The Game, was not developed to compensate for the sudden halt to lab work caused by the coronavirus, but so that anyone could step into the shoes of a scientist in the virtual world. You start by creating your own avatar, and then embark on a stem-cell career from undergraduate to professor — through working in the lab, completing research papers, solving ethical dilemmas, chatting with colleagues and upgrading the office — while keeping the demanding stem cells alive. If it feels familiar to some of you, that’s because it’s supposed to.

I designed a game about my life in the lab because I wanted to find a new way to show the public the realities of being a scientist. Science in general, and stem-cell research in particular, seemed like hot topics that needed to get past the closed academic doors and be engaged with at first hand. The idea of involving people directly with a ‘lab in your phone’ was an exciting challenge. And with the option to customize your own avatar, I wanted to contribute to the view that anyone can do science.

How did it happen?

Dish Life started in the spring of 2016, in my office at the Cambridge Stem Cell Institute, where I was working at the time. I received an e-mail about a University of Cambridge grant competition aimed at getting science and humanities researchers to collaborate with local film-makers to showcase their research. The competition wanted interdisciplinary ideas that could be turned into engaging short films to allow scientists to share their work with the public in an accessible and innovative form. It was the chance I had been waiting for to talk about the human aspect of my research in a creative way.

The next step was to find a collaborator who might be interested in putting together the grant proposal for a film. I found the reproductive sociology research group at the university led by Sarah Franklin, who studies the social aspects and ethics of stem-cell research. We discussed an idea for a film about stem-cell scientists’ emotional relationship with their cells, and the first version of Dish Life — a film — was born. Soon after, I met Franklin’s student Karen Jent, who was preparing a PhD thesis on the challenges that stem-cell scientists face in turning cell cultures in the lab into therapies outside it. We realized that, by marrying our disciplines, we could shed light on the human aspects of science for a broad audience, and we could base it on published sociological research.

Months later, we premiered the Dish Life documentary, created together with film-maker Chloe Thomas, who wrote and directed it. We couldn’t have done it alone; each of us played a different and irreplaceable role.

The film travelled the world at film festivals and, a year later, on the strength of the responses it received, we decided to take it a step further and create a game based on the film. We soon realized we needed a bigger team and more funds. Jent’s sociologist colleague Lucy van de Wiel joined the team and Thomas stayed on board as creator in the game’s genesis. Funds were raised through grants from Wellcome, the London-based science-funding charity, and the UK Economic and Social Research Council, with the backing of the reproductive sociology research group.

We then asked for pitches from game-developers, and chose Pocket Sized Hands, a gaming-design company based in Dundee, UK. The game developers visited the stem-cell institute’s lab to hold focus groups for scientists, sociologists and secondary-school teachers. For two years, we all co-designed the game remotely, using the collaboration platform Slack and teleconferencing, shaping the concept with art designers and coders, incorporating user feedback, and always trying to strike a balance between game mechanics and scientific accuracy.

The career benefits of making a science game

When we set out, I and my academic colleagues weren’t thinking about the new skills we might acquire along the way. But this is what I have learnt:

Communication. The multidisciplinary nature of the project taught me to be clear and succinct. I had to communicate across three different fields: sociology, entertainment and stem-cell science. The whole experience has also been a learning curve in project management and entrepreneurship.

Intellectual property. We paired with Cambridge Enterprise, the university’s research-commercialization arm, to navigate the intellectual-property landscape — to stipulate the licensing aspects for updating the app and making it free to download. This was a completely new experience for everyone in the context of games created by academics.

Media coverage. Close to the launch, I entered a new world of writing university press releases and handling media relations. I even had a crash course in television broadcasting when BBC News decided to cover Dish Life.

Impact. The number of people we are reaching with the game is much greater than for any public-engagement event I have ever been involved in: we reached thousands of people in the space of weeks. We had professors reliving their heydays with their avatars; A-level students endorsing the game; and even a blogger who wrote a step-by-step guide on how to become a professor in the game.

My advice to researchers interested in increasing their public-engagement impact is to really look around the university and beyond, and start new collaborations. A surprising thing I learnt is that people are overwhelmingly interested in scientists’ working lives; they want to see how we do science. I didn’t know I was going to end up making a game, but I am glad I took that initial leap of faith.

Now I can return to playing at being a scientist until they let us back into the building again.