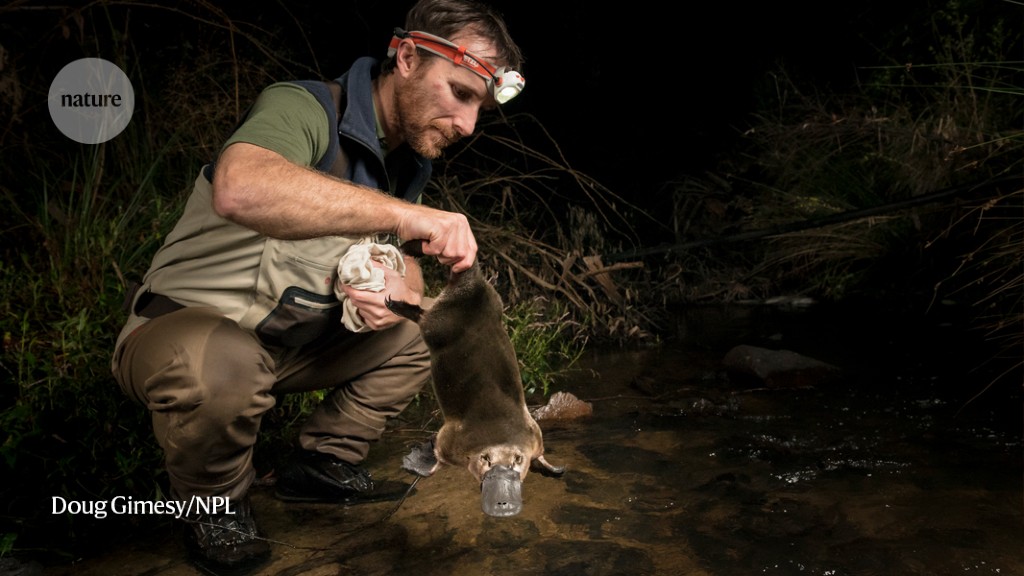 As a wildlife ecologist, I study many species, but the platypus (Ornithorhynchus anatinus) is my speciality. I’ve worked with these duck-billed monotremes, which are indigenous to eastern Australia, for 13 years. So much remains unknown about them — as solitary animals, they are very hard to capture. The males have a venomous spur on each of their hind feet, so I always hold them by the tail. Luckily, I’ve never been spurred.

At the environmental consultancy firm Cesar Australia, we’ve focused on whether platypuses’ numbers are rising or falling. Their aquatic habitat has shrunk by 25% in the past 30 years — partly owing to reduced rainfall from climate change and partly to residential and industrial development, leaving less water, which is of poorer quality.

To monitor the population’s size and health, we do overnight trapping surveys — typically during the spring breeding season and in the autumn, when the babies emerge. For each survey, we set up nets along 5–10 kilometres of waterway and then drive round checking them through the night. It’s a long, sleepless process that usually yields just one or two catches. In the 15 minutes or so for which each animal is out of the water, we weigh and measure it. If it’s carrying an identification chip, we know we’ve caught it before. If not, we implant one in the animal. In this picture, I am releasing a platypus back into a stream outside Melbourne.

In the past five years, we’ve also been sampling environmental DNA for signatures of platypuses’ presence. It’s been a game-changer in terms of mapping their distribution. We can take a water sample, extract all the DNA and confidently identify whether platypus DNA is present. We’ve surveyed more than 2,000 sites spanning 500,000 square kilometres, enabling us to measure at scales never before possible.

We’ve also developed a citizen-science platform through which people can submit platypus sightings. This helps us still further.