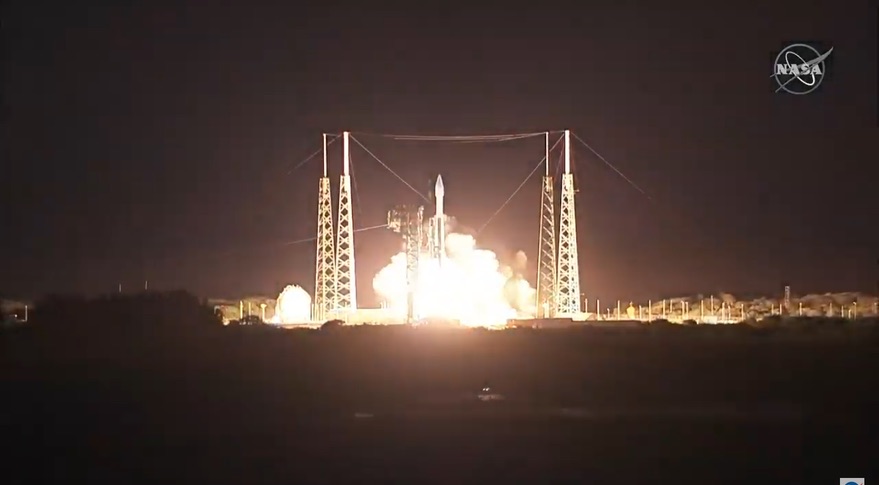 WASHINGTON — An Atlas 5 successfully launched a European-led solar science mission Feb. 9, the latest effort in what scientists are calling a “golden age” for studying the sun.

The 1,800-kilogram Solar Orbiter, built by Airbus Defence and Space for ESA, carries 10 instruments to study the sun and the environment around the spacecraft. NASA is a partner on the mission, supplying one instrument, called the Heliospheric Imager, as well as components for other instruments and the launch itself. The total mission cost is $1.5 billion, counting both ESA and NASA contributions.

Like NASA’s Parker Solar Probe, launched in August 2018, Solar Orbiter sports a sunshield to protect the spacecraft and instruments from the sun’s heat. That shield is based on the one that ESA’s BepiColombo mission to Mercury uses since the spacecraft gets to within 42 million kilometers of the sun, just inside the orbit of Mercury and not as close as Parker Solar Probe.

Scientists plan to use Solar Orbiter to answer key questions about the sun, such as the its magnetic field, the formation of the solar wind, and how solar activity like flares and coronal mass ejections affect solar weather at the Earth. “Our entire solar system is really governed by the activity that comes from the sun,” said Nicola Fox, director of NASA’s heliophysics division, at a Feb. 7 pre-launch briefing at the Kennedy Space Center.

That includes, she said, understanding solar storms and how they can pose hazards for human missions beyond Earth orbit. “As NASA moves forward to return to the moon, Mars and beyond with our Artemis program, missions like Solar Orbiter joining our fleet become really critical.”

What sets Solar Orbiter apart will be its ability to observe the poles of the sun. The spacecraft will perform a series of flybys of Venus to increase the inclination of the orbit around the sun, allowing it to see the poles of the sun. By 2025, the orbit will be inclined such that the spacecraft is at a solar latitude of 17 degrees when it makes its closest approach to the sun, rising to 33 degrees by 2029.

“For Solar Orbiter, the key thing is that it is going out of the ecliptic — that plane where the planets all orbit — to give us unprecedented views of the poles,” Fox said. The only other spacecraft to observe the poles was the ESA/NASA Ulysses mission, launched in 1990, but that spacecraft did not have a camera. “Solar Orbiter is designed to go and be able to unlock these mysteries.”

Solar Orbiter won’t be able to unlock those mysteries immediately. The spacecraft will make its first close approach to the sun, inside the orbit of Mercury, in October 2022. However, Daniel Mueller, Solar Orbiter project scientist at ESA, said the spacecraft will come about halfway between the Earth and sun in June. “That will be the first time we will actually get new and exciting data,” he said. The full mission will formally start in November 2021.

The mission is designed to last at least 10 years. During much of that mission it will coordinate its observations with the Parker Solar Probe, particularly during Parker’s close approaches to the sun that will bring it as close as 6.2 million kilometers to the sun. The two spacecraft will be able to provide complementary sets of observations.

“The two together are really perfect,” said Guenther Hasinger, ESA’s director of science. “Sometimes Parker Solar Probe flies over the surface of the sun at a certain magnetic field region, and then Solar Orbiter is watching Parker observe, and can actually connect what it sees to the magnetic field.”

The launch of Solar Orbiter is the latest in string of major milestones for the field of heliophysics, including ongoing operations of Parker Solar Probe and the completion of the Daniel K. Inouye Solar Telescope on the Hawaiian island of Maui. The National Science Foundation released Jan. 29 first images of the sun taken by that observatory, the largest in the world devoted to observing the sun, showing it’s capable of producing the highest-resolution images of the sun’s photosphere, seeing features as small as 30 kilometers across.

“It is kind of a golden age for solar physics right now,” Fox said during a Jan. 27 media teleconference about the mission. “It’s a great time to be a heliophysicist.”