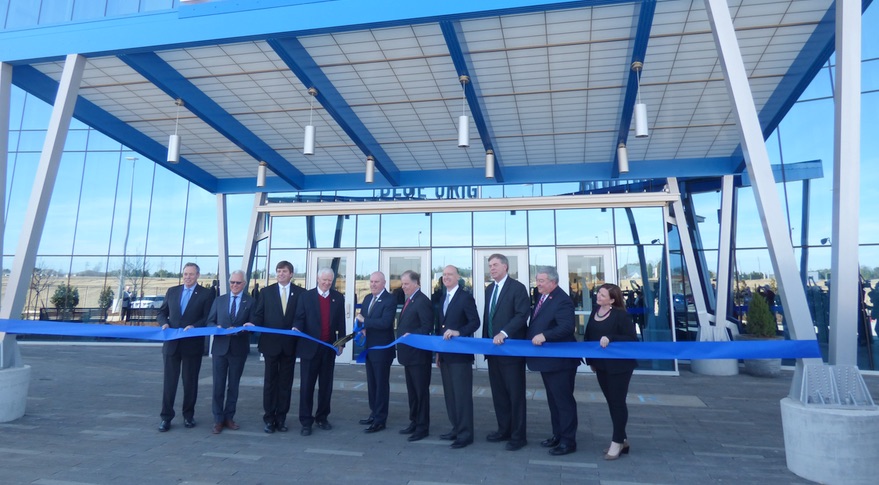 HUNTSVILLE, Ala. — Blue Origin formally opened a factory Feb. 17 that the company plans to use to produce engines both for its vehicles and for United Launch Alliance’s Vulcan rocket.

A ribbon-cutting ceremony marked the completion of a 350,000-square-foot factory here that will produce BE-4 and BE-3U engines. The factory, built in a little more than a year, will host more than 300 employees and produce up to 42 engines a year.

“You can see we can get some things done really quickly,” said Bob Smith, chief executive of Blue Origin, in remarks at the ceremony. “Twelve months to actually build this kind of facility is an amazing accomplishment for our team.”

While the building is complete, Blue Origin is not yet ready to start producing engines there. Employees will start moving into the factory this week, company officials said, with tooling and other equipment to start arriving in the coming weeks. The factory should be ready to start building BE-4 engines this summer, starting with a “site certification” engine that will be fired at both at Blue Origin’s West Texas test site and a test stand at NASA’s Marshall Space Flight Center that the company is refurbishing.

Blue Origin is currently building BE-4 engines at its headquarters in Kent, Washington. That work includes a series of engines used in testing and two “flight readiness” engines that Smith said in his remarks will be delivered to United Launch Alliance in May for integration on that company’s Vulcan rocket for testing. The first engines intended for flight will also be produced there.

The company plans to transition production over a couple of years from Kent to Huntsville. Once the BE-4 production line is stabilized, Huntsville staff will be trained in Kent and then return to ramp up engine production in Huntsville. Ultimately the factory will be able to produce 42 engines a year, split roughly evenly between the BE-4 and the BE-3U engine that will power the upper stage of New Glenn. The company expects to take two to three years to reach that production rate.

The BE-4 engine, two of which will be used on the first stage of Vulcan and seven on the reusable first stage of New Glenn, is nearing the end of its development. Company officials estimated it would take three to four months to retire final technical risks with the engine before proceeding into final qualification tests.

Completion of the factory is just one of many milestones for Blue Origin this year. Smith said he expects the company’s other major construction project, Launch Complex 36 at Cape Canaveral Air Force Station in Florida, to be “mostly done” this year. That site will host New Glenn launches that the company now expects to begin in late 2021, according to a company fact sheet.

Blue Origin is also nearly ready to carry people on its New Shepard suborbital vehicle. While the company expected that milestone to be achieved last year, Smith noted last fall the company “tapped the brakes” on those plans in order to do more work on the vehicle to verify it can safely carry people. New Shepard last flew in December, and company officials, speaking on background after the ceremony, estimate there may be as many as three to four more uncrewed New Shepard flights before Blue Origin puts people on board.

Another priority for the company is potential development of a crewed lunar lander for NASA’s Artemis program. The company announced in October it was leading a “national team” with Draper, Lockheed Martin and Northrop Grumman to propose a lunar lander for the Human Landing System program at NASA.

“We’re getting ready to hopefully receive an award from NASA for the Artemis program,” Smith said. NASA, in a procurement filing last week, said that it expects to make awards in late March or early April.

The factory opening got a warm reception from local officials, who touted Blue Origin’s $200 million investment in the facility and plans to employ as many as 400 people once in full production. Among those in attendance were Sen. Doug Jones (R-Ala.) and Reps. Robert Aderholt (R-Ala.) and Mo Brooks (R-Ala.)