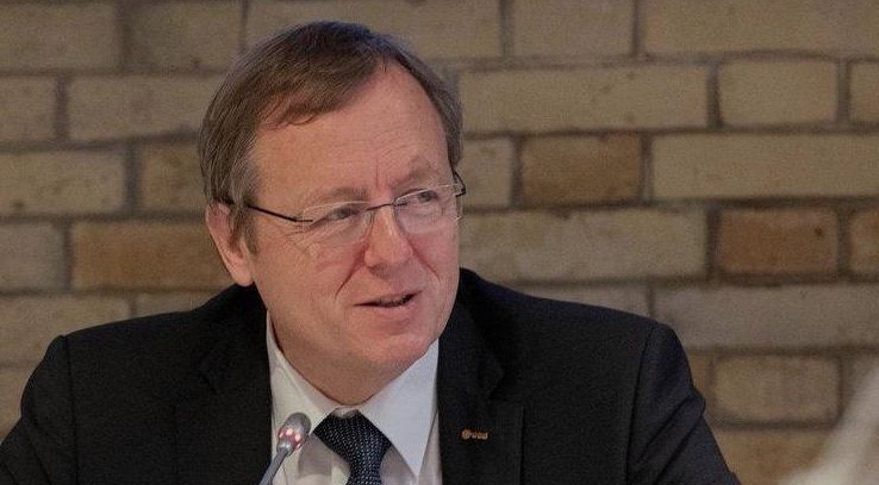 WASHINGTON — With its funding secured for the next three years, the head of the European Space Agency is now focused on implementing those key programs while establishing a new cooperative agreement with the European Union.

At a press briefing Jan. 15 at ESA’s Paris headquarters, ESA Director General Jan Woerner reviewed the outcome of the agency’s Space19+ ministerial meeting in November in Seville, Spain, where the agency’s 22 member states largely endorsed ESA’s plans for the next three years in topics from science to space transportation to safety and security.

That ministerial resulted in a commitment of nearly 12.6 billion euros ($14.1 billion) for the next three years, or 14.5 billion euros when including some science and basic activities that are funded for five years rather than three. That total is about 120 million euros higher than what ESA announced at the end of the Space19+ meeting, which Woerner said was due to Romania not being able to formally commit its funding until a week after the meeting.

For 2020, ESA’s overall budget is 6.68 billion euros, 70% of which comes from its member states. The EU contributes 23% to cover work on the Copernicus program of Earth observations missions and the Galileo satellite navigation system, while the rest comes from the Eumetsat weather agency and other sources, including public-private partnerships with industry.

ESA’s relationship with the EU is a key topic for the coming year. Woerner said ESA is negotiating a new agreement with the EU, formally known as a financial framework partnership agreement, about how to share costs on programs like Copernicus and Galileo. “This is one very important step that we have to conclude this year,” he said.

The EU will start a new multiannual financial framework (MFF) for its space program in 2021. In 2018, EU officials said they were seeking 16 billion euros for that MFF for 2021 through 2027, primarily for Galileo and Copernicus but also including funding for space situational awareness and government satellite communications.

That proposal, later increased to 16.9 billion euros, is now in jeopardy. A revised MFF published Dec. 5 by the EU presidency proposed cutting that budget by one fourth, to 12.7 billion euros. EU members have yet to reach a final agreement on the budget for the 2021–2027 period.

Woerner said discussions are only just beginning between ESA and the EU on a new partnership agreement. “We had one informal meeting last year about possible contents” of a new agreement, he said, adding that ESA would try to set up next week meetings with the European Commission about negotiating a new agreement. “We should be ready this year.”

He also downplayed any effect an EU budget cut would have on joint programs with ESA, while advocating for a larger budget. In the case of Copernicus, he said ESA is funding “non-recurring” satellites that would not be affected by cuts in EU spending.

“As I was involved last year for the 16 billion [euros], we will also support that this number is surviving, because we believe we need it for Copernicus as well as for Galileo,” he said, in additional to the smaller programs.

As ESA works with the EU on future agreements and funding, it’s also working to implement its current programs. One highlight for the coming year, and one whose launch remains in question, is the ExoMars 2020 lander and rover. Two parachute failures during tests in 2019 raised doubts that the mission will be ready in time for a launch during a narrow window in July and August. Should the spacecraft not be ready, its next launch opportunity would not be until the latter half of 2022.

Woerner and David Parker, ESA’s director of human and robotic exploration, said they were optimistic that ExoMars would launch this summer. Parker said the redesigned parachute system has been undergoing tests at NASA’s Jet Propulsion Laboratory, the fourth of which took place Jan. 13. Those tests, he said, have been successful.

“We are now shifting our focus to preparing for two high-altitude drop tests,” Parker said, scheduled for February and March in Oregon. “Only when we have completed those tests will we know that we have a system that’s safe to launch.”

“We are now on a good side,” Woerner said, confident that the upcoming tests will confirm the mission can proceed with launch this year. “This is not any obstacle for the flight in the summer of this year.”

Rallyhood exposed a decade of users’ private data
Australia to hold wide-ranging enquiry into disastrous bushfires
Oil rises on supply worries, while virus-led demand concerns ease
‘No one is allowed to go out’: your stories from the coronavirus outbreak
Olay says it will stop skin retouching in its ads by the end of the year