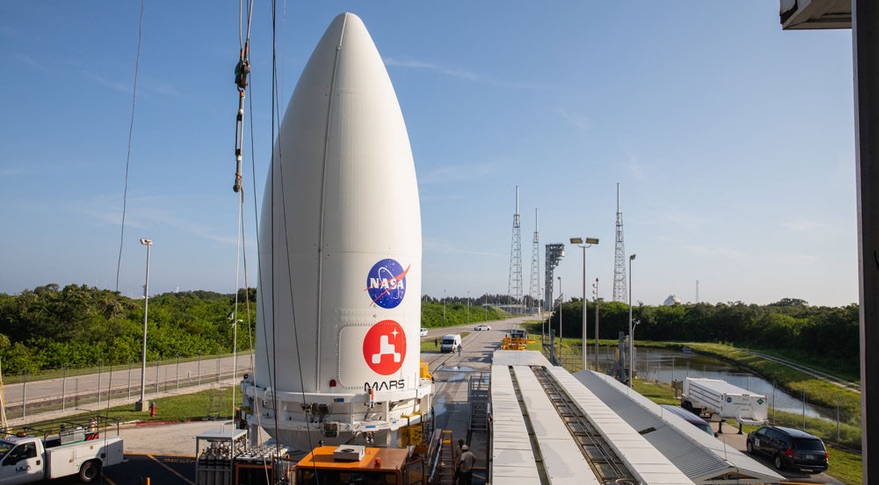 WASHINGTON — Four months after closing centers because of the coronavirus pandemic, NASA has been able to keep its highest priority missions on track, even as others have suffered delays.

NASA’s Mars 2020 mission is scheduled for launch July 30 on an Atlas 5 rocket from Cape Canaveral, Florida. The launch slipped from July 17 because of several launch vehicle and related processing issues, but the launch period for the mission remains open through at least Aug. 15.

Launch preparations for the mission continued amid the coronavirus pandemic. “I really cannot say enough about how incredible this team was,” Michael Watkins, director of the Jet Propulsion Laboratory, said about personnel working on the mission during a July 20 webinar organized by the Space Foundation. “It is a heroic effort in the best of times, and this team really knuckled down and completed it on schedule.”

Watkins said that, among the more than 1,000 people involved with the mission, about 100 have been at Cape Canaveral working on final launch preparations, with several hundred more working at JPL. “It’s been a surprisingly smooth experience given all the troubles with COVID,” he said. “We’re basically at the pad, ready to go.”

NASA made Mars 2020 one of its two highest priorities in the spring when the pandemic forced NASA to close its centers to all but essential personnel. The other was the SpaceX Demo-2 commercial crew test flight, which successfully launched May 30 and docked with the International Space Station the next day.

That mission is nearing an end. NASA Administrator Jim Bridenstine, speaking at the same webinar, said preparations for the return home by astronauts Bob Behnken and Doug Hurley would become the focus once Behnken and Chris Cassidy performed the last in a series of spacewalks, which they carried out July 21. “Then they’re going to be focused like a laser on coming home,” he said, with a splashdown off the Florida coast currently targeted for Aug. 2.

While both Demo-2 and Mars 2020 have remained on track, other major NASA programs have suffered delays. NASA announced July 16 that the launch of the James Webb Space Telescope had slipped seven months, to the end of October 2021, with the pandemic contributing at least three months to that overall delay.

Testing of the Space Launch System core stage at the Stennis Space Center, part of a Green Run campaign that will conclude with a full-duration static-fire test, was halted for two months when the pandemic closed the center. That work has since resumed, with the static-fire test now scheduled for October, but Bridenstine has hinted that the pandemic could cause additional delays.

“We’ve had outbreaks of coronavirus on that program and people that are working on that test stand,” he said during a July 17 Aviation Week webinar. “Every time we have something like that, we’ve got to make sure we’re putting people into a position where we’re not infecting others, that we’re doing the contact tracing. It brings everything to a stop.”

He said that he felt “OK for now” regarding the schedule, but additional cases that halt work for up to a week at a time could use up the margin in the test schedule. “If we don’t get a grip on the coronavirus pandemic in the near future,” he warned, “it’s going to be difficult.”

That could also affect the first SLS launch, Artemis 1, notionally scheduled for November 2021. “If the coronavirus pandemic is not an issue, I’m very confident in November of 2021. If it continues to be an issue, it could be a challenge,” he warned.

As of July 21, all of NASA’s facilities were at Stage 3 of its pandemic response plan except for the Marshall Space Flight Center, which remained at Stage 4. At its peak, about two-thirds of NASA’s 18 field centers and other facilities were at Stage 4, which allowed only mission-essential personnel on site. At Stage 3, additional personnel needed for critical work for missions are allowed to return, although mandatory telework otherwise remains in place.

NASA has shifted most of its centers back to Stage 3 despite a spike in coronavirus cases in many parts of the country, particularly in southern and western states. During a July 16 media teleconference about the JWST delay, Steve Jurczyk, NASA associate administrator, said there has been an increase in cases reported among NASA personnel, although not apparently due to work at the centers.

“The cases at some of our centers have increased quite a bit over the last several weeks,” he said, citing in particular those in Alabama, California, Florida and Texas, but not giving specific numbers. “We really haven’t so far detected any cases where one employee has transmitted the virus to another at work. So far, we believe that all, or most, of the cases are people who are contracting the virus in the community and then coming to work.”

The surge in coronavirus cases has privately alarmed some people involved with Mars 2020 who are traveling to Florida to support or observe the launch. Some traveling from the Washington, D.C. area are considering driving rather than flying, despite the additional time and expense, to reduce their risk of exposure to COVID-19.

As with the Demo-2 launch, NASA is limiting the number of media personnel who will be on site at the Kennedy Space Center to cover the launch, and most pre-launch briefings will have remote access only. “For the protection of media and Kennedy employees, the Kennedy Press Site News Center facilities will remain closed to all media throughout these events,” NASA said in a July 17 media advisory.

Invasive Blue Crab Species Wrecks Livelihood of Fishermen in Albania
The digital divide worsens the inequitable impacts of the climate crisis
Isaias Leaves at Least 5 Dead in the US and is Now in Canada
Hurricane Isaias Goes Through the Atlantic as Florida and the Bahamas Brace for Disaster
NASA Astronauts Riding SpaceX Capsule Poised for Weekend Return, Weather Permitting