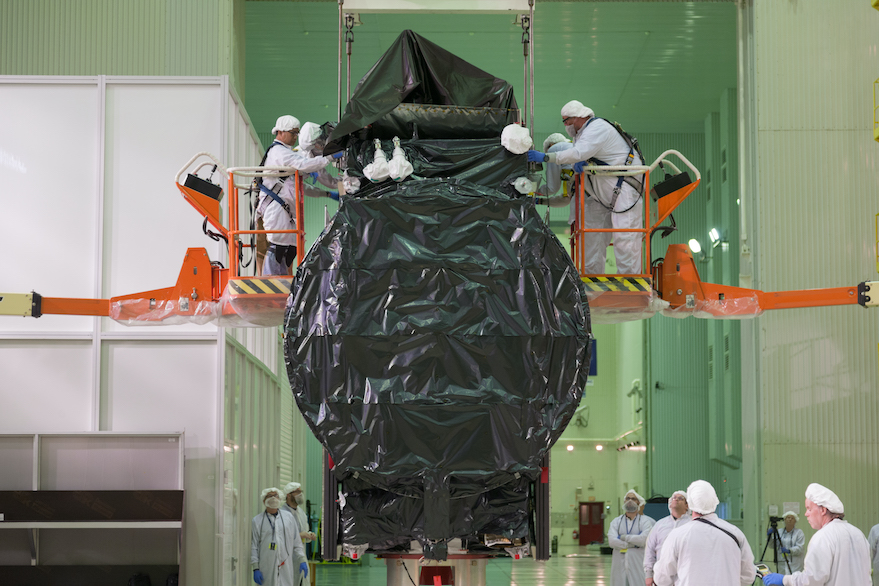 WASHINGTON — A Eutelsat Communications satellite that launched in October will enter service this month with only 45% of its intended capacity due to an unusable solar array, Eutelsat said Jan. 17.

Eutelsat said an investigation into the Eutelsat 5 West B satellite concluded that one of its two solar arrays was unusable, reducing power to support communications services.

A hosted payload for the European GNSS Agency called GEO-3 remains operational, and should start service after a couple months delay, she said.

Eutelsat 5 West B uses a Northrop Grumman GEOStar-2 platform with an all Ku-band payload from Airbus Defence and Space. Ecuer declined to say if Eutelsat traced the broken solar array to a specific supplier.

Eutelsat expects the power loss will reduce the company’s revenue by 5-million to 10-million euros ($5.5 million to $11 million) for the remainder of its fiscal year, which ends June 30.

The GEO-3 hosted payload is designed to sharpen satellite navigation signals for aircraft as part of the European Geostationary Navigation Overlay System, or EGNOS. It is anticipated to generate around 7 million euros in annual revenue for Eutelsat, or 102 million euros over its 15-year life span.

Ecuer said Eutelsat plans to keep the 17-and-a-half-year-old Eutelsat 5 West A satellite in a fuel-saving inclined orbit so that it can accommodate customers for a longer period of time.

Eutelsat 5 West B was a replacement satellite for Eutelsat 5 West A. Satellites in inclined orbits save fuel by limiting their station-keeping maneuvers, a process that extends their lives but limits the types of customers they can serve.

Ecuer said Eutelsat’s mitigation plan for the lost capacity also includes optimizing the capacity on Eutelsat 5 West B, and shifting customers to satellites at other orbital locations. The company estimates it will incur up to 10 million euros in antenna repointing costs as it redirects customer dishes to link with other satellites.

Eutelsat 5 West B customers are mainly broadcasters in France and Europe, and fixed data broadband users in the Middle East and Northern Africa, she said.

Eutelsat has yet to decide on the size of an insurance claim it will file for the satellite’s lost performance, Ecuer said. Eutelsat 5 West B was insured by a launch-plus-one-year policy for up to 173 million euros.