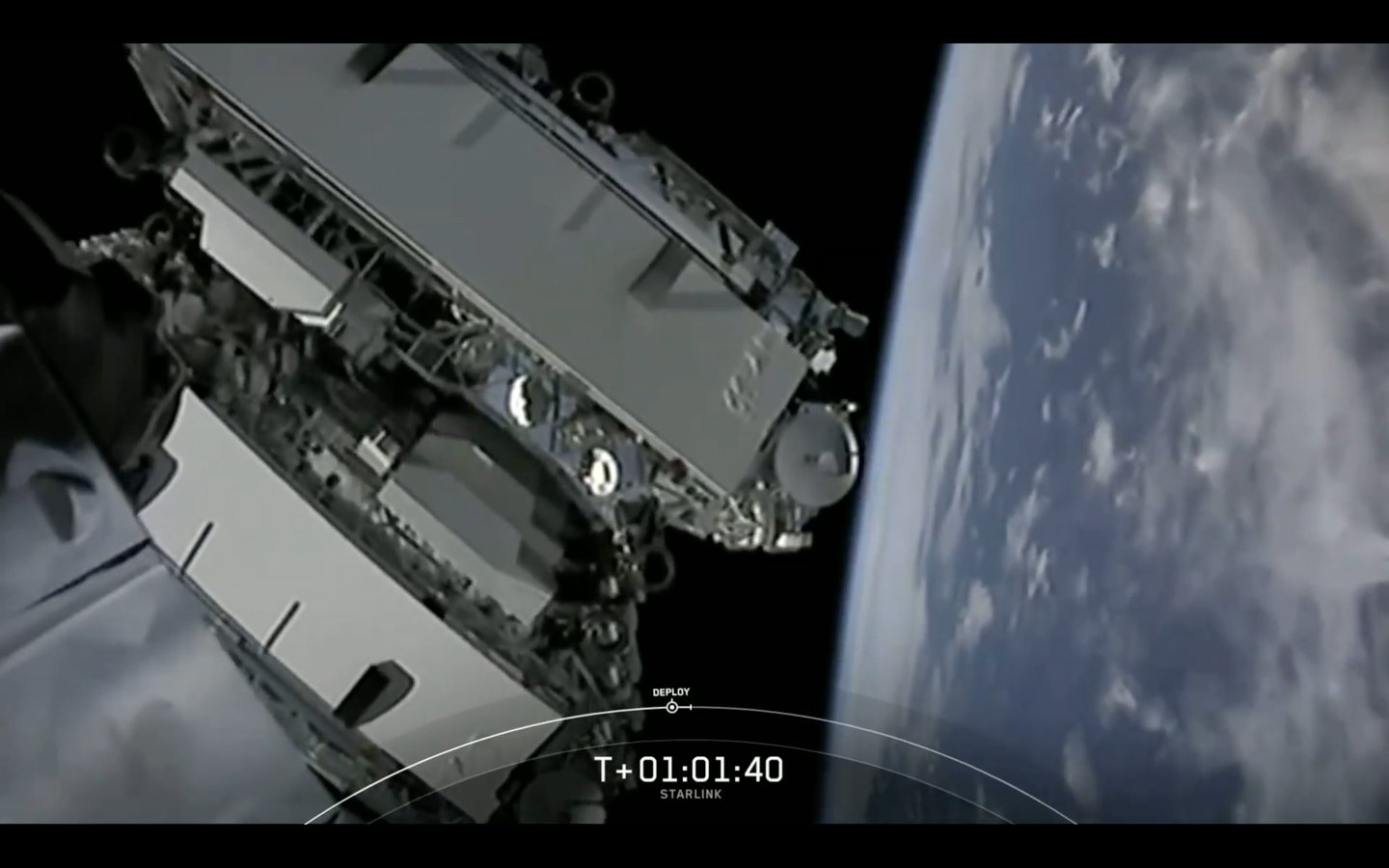 WASHINGTON — SpaceX launched 60 of its own Starlink broadband satellites on a Falcon 9 rocket Jan. 6, becoming the operator of the world’s largest commercial satellite constellation.

The Falcon 9 rocket lifted off at 9:19 p.m. Eastern from Cape Canaveral, Florida, on SpaceX’s first launch of the year. The company’s 60 Starlink satellites, built to provide high-speed internet, separated from the rocket’s upper stage about an hour later.

SpaceX’s fairing-catcher ship “Ms. Tree” was unsuccessful in netting a fairing half after the launch.

The rocket’s first stage landed on the drone ship “Of Course I Still Love You” in the Atlantic Ocean, completing its fourth mission. SpaceX used this same booster to launch 60 Starlink satellites to low Earth orbit in May 2019, 10 Iridium Next satellites for Iridium in January 2019, and Telesat Canada’s Telstar 18 Vantage geostationary satellite in September 2018.

It’s not clear if all 182 Starlink satellites will be part of the constellation SpaceX expects to begin service with later this year. Some 10 satellites from SpaceX’s May 2019 Starlink launch never reached their final operational orbit, according to a Jan. 2 report from Jonathan McDowell, an astronomer at the Harvard-Smithsonian Center for Astrophysics who tracks satellite movements.

SpaceX said in July that three Starlink satellites had failed shortly after launch, and that another two healthy satellites would be intentionally deorbited as practice. The company did not respond to a SpaceNews inquiry Jan. 6 as to why 10 satellites have not reached their target orbit instead of five.

Regardless of if Starlink has 172 or 182 satellites, SpaceX still eclipses Planet, which has a constellation of 150 remote-sensing satellites, as the record holder for the world’s largest commercial satellite constellation.

SpaceX is deploying its first 1,584 satellites at 550 kilometers to accelerate service rollout and reduce the risk of creating orbital debris. At that altitude, any Starlink satellites that fail would naturally deorbit from atmospheric drag within 25 years — a guideline suggested by NASA and other space agencies.

One of the 60 satellites launched tonight was given a “darkening treatment” to make it less reflective. Shotwell told reporters last month that SpaceX is experimenting with different ways to make Starlink satellites less reflective so they don’t interfere with ground-based astronomy.

In December, the U.S. Federal Communications Commission approved a SpaceX request to fan out its Starlink satellites in more 550-kilometer orbits — a modification SpaceX says will enable the company to expand Starlink’s coverage to populated areas more rapidly.

SpaceX is building and launching up to 12,000 Starlink satellites, and has filed regulatory paperwork with the United Nations’ International Telecommunications Union for another 30,000 satellites.

SpaceX CEO Elon Musk said in May that Starlink would be “economically viable” at 1,000 satellites. He said reaching 12,000 satellites would be a “very successful outcome” for Starlink.