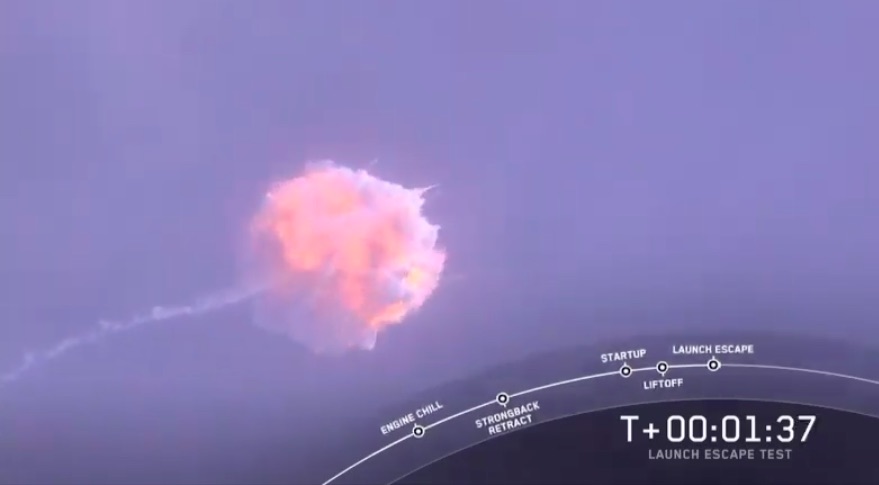 WASHINGTON — SpaceX successfully tested the abort system of its Crew Dragon spacecraft, one of the final milestones before the vehicle is cleared to carry astronauts to the International Space Station.

A Falcon 9 carrying the Crew Dragon spacecraft lifted off from Launch Complex 39A at the Kennedy Space Center at 10:30 a.m. Eastern, one day after poor weather postponed the previous launch attempt.

About 84 seconds after liftoff, the Crew Dragon ignited its eight SuperDraco thrusters, pulling the vehicle away from the Falcon 9. The spacecraft later jettisoned its trunk section and deployed parachutes, splashing down in the Atlantic Ocean about 32 kilometers offshore nearly nine minutes after liftoff.

The Falcon 9 rocket broke up and exploded several seconds after the Crew Dragon escape. That breakup and subsequent fireball was expected, as SpaceX officials said prior to the test that the first stage booster, making its fourth flight, would not survive the test.

“Fairly quickly, Falcon will be going through a lot of aerodynamic issues,” said Benji Reed, director of crew mission management at SpaceX, during a pre-flight press conference Jan. 17. With the capsule no longer on top of the rocket, the top of the upper stage became “a big air scoop,” he said. “At some point we expect the Falcon will start to break up” with some of the remaining fuel and oxidizer igniting.

While analysis of data from the test is expected to take several weeks, the test appeared to go as expected. “It looks like, right now, a great test visually,” said John Insprucker, Falcon principal integration engineer at SpaceX, at the end of the live broadcast of the test.

The in-flight abort test was one of the last major tests for the vehicle before a crewed test flight, called Demo-2, with NASA astronauts Bob Behnken and Doug Hurley on board. At the Jan. 17 briefing, Kathy Lueders, manager of the commercial crew program at NASA, said some additional system-level tests of the spacecraft’s upgraded parachutes still needed to be completed, as well as other reviews of the spacecraft.

“Us stepping through that together and making sure that we’ve dotted all the i’s and crossed the t’s before our crew demonstration flight is very, very, important,” she said. She didn’t give an estimate of when that Demo-2 mission might take place, although Reed said the spacecraft itself should arrive in Florida for launch preparations by the end of the month.

“We’ve got work to do,” Lueders added, “but, honestly, getting this test behind us is a huge milestone.”

U.S. Space Force names its first senior enlisted advisor
Microsoft cut off this game developer’s revenue stream, so he built his own replacement
Olay says it will stop skin retouching in its ads by the end of the year
Tesla aims to revitalize its solar energy and storage business this year after 2019 slump
Cygnus launches to space station