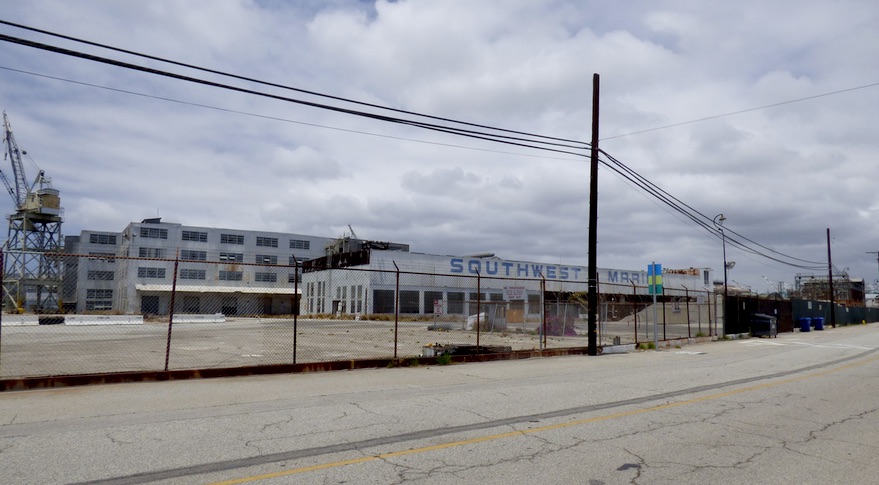 WASHINGTON — SpaceX has revived plans to develop a launch vehicle manufacturing facility at the Port of Los Angeles, a little more than a year after it abandoned its original agreement there.

The Los Angeles Board of Harbor Commissioners approved on a voice vote Feb. 20 an agreement between the port and SpaceX to lease 12.5 acres of property at the port. The lease would run for 10 years, with options for two 10-year extensions.

Neither port officials nor SpaceX disclosed the company’s specific plans for the property, which currently has several vacant buildings from a previous tenant, Southwest Marine. The lease agreement states that the property will be used for “construction and operation of a facility for research and development, design and manufacture of specialized aerospace vehicles, and water dependent recovery and transportation operations.”

“We’re very inspired by that property,” said Matthew Thompson, director of environmental, health and safety at SpaceX, in testimony at the board meeting. “We are very interested in developing our operations there and I think it presents a unique opportunity for us based on the previous history of the project, and obviously the water access for some of the plans that we have for the project.”

SpaceX and the port had an earlier agreement to lease the property in 2018, when the company said it planned to build a factory there for what was then known as its Big Falcon Rocket, now known as Starship and Super Heavy. The large size of the vehicles requires the water access the port site provided to transport the vehicles to launch sites in Florida or Texas.

However, in January 2019, SpaceX pulled out of the project, announcing that to “streamline operations” it would build Starship vehicles at its South Texas site. The company also started building a second Starship vehicle at an industrial site in Cocoa, Florida, near Cape Canaveral.

Last month, though, SpaceX approached the port about a revised lease agreement, according to local reports that said that SpaceX was interested in returning to the port “after encountering complications” with its plan to build the vehicles elsewhere.

The new agreement, though, is scaled back from the original lease. That original agreement called for SpaceX to build an 80,000-square-foot factory on the property initially, with the options to build up to 200,000 square feet of additional facilities. The site would ultimately employ 700 people.

The new plan, though, calls for “adaptive reuse” of the existing Southwest Marine buildings on the site, said Marisa Katnich, director of cargo and industrial real estate for the Port of Los Angeles, at the hearing. “SpaceX plans will maximize the opportunity to revitalize and transform the site, while still complying with all the rules with dealing with historic structures,” she said.

Those revised plans prompted a series of questions from one commissioner, Diane Middleton, who noted that the lease agreement states the property will create only about 130 aerospace jobs. She also questioned $44.1 million in rent credits SpaceX would be eligible for to compensate it for property improvements and site remediation. “I’m not in favor of giving away port property,” she said.

Katnich said that the deal should create construction jobs beyond the 130 aerospace jobs. “Because SpaceX hasn’t completed their construction plan yet, because there’s some variability in what they’re going to construct, they do not have those numbers quite yet,” she said.

SpaceX’s initial plans for the property involve building a tent there of unspecified size. SpaceX has used large tents in other facilities, such as South Texas, for construction work. “It appears there’s some urgency on the part of SpaceX to get going quickly, so that’s why they’ve switched to this concept of a tent, rather than waiting to put up a building,” Middleton said.

Katnich said she did not know if that tent would be a permanent structure at the site, and thus qualify for a rent credit. She added that, when taking into account annual rent adjustments for inflation and five-year adjustments for fair market value, the port estimated it would not see a positive cash flow until the 18th year of the agreement, assuming SpaceX makes use all of the available rent credits.

Middleton appeared satisfied with those issues. “I can only say to SpaceX we look forward to you being good neighbors,” she said, later voting in favor of the lease agreement with her fellow commissioners.

The agreement still requires approval by the Los Angeles City Council, which is expected at a council meeting next week. The council unanimously approved the original agreement in May 2018.

SpaceX, meanwhile, is continuing work building its next Starship prototype, called Starship SN1, in Boca Chica, Texas. Elon Musk tweeted Feb. 20 video of a nearly completed “high bay” there that will be used for vertical stacking of the main sections of Starship there. The company has not announced a date for first flights of that vehicle, and while it has filed applications for Federal Communications Commission licenses for telemetry and radar operations related to suborbital test flights of the vehicle, it has yet to obtain a Federal Aviation Administration launch license or experimental permit required for such flights.

Orchestrating the energy transition: Tuning into buildings
NASA Live: Earth Views from the Space Station
How is the pandemic affecting the profession of sustainability?
Virgin Orbit selects Japanese airport as launch site
Want to survive the downturn? Better build a platform