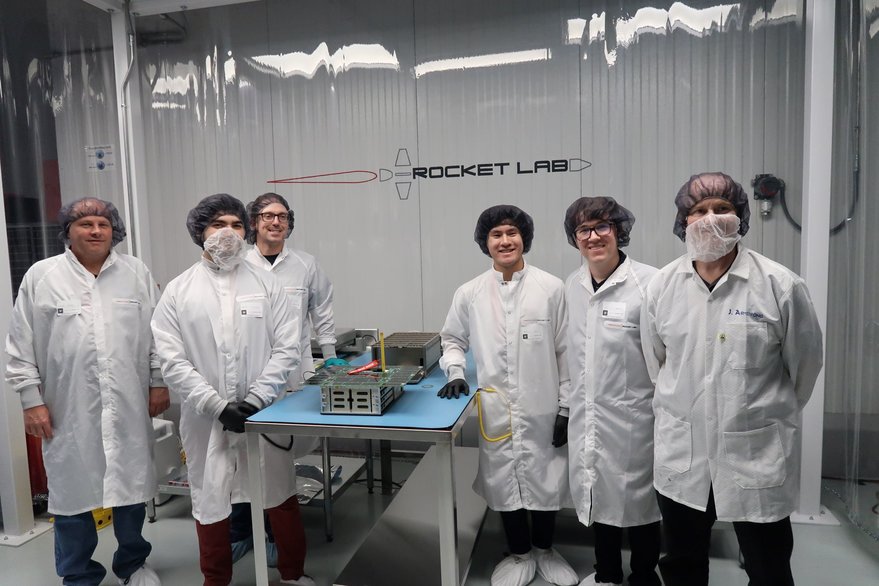 The mission called ANDESITE, or Ad-Hoc Network Demonstration for Extended Satellite-Based Inquiry, relies on a toaster-sized mothership to eject eight nodes, each about the size of a slice of toast. In orbit, the nodes create a wireless network and relay magnetometer data to the mothership through low-power radios.

“We don’t know of any other missions of this type in the commercial or academics worlds,” Joshua Semeter, an electrical engineering professor with Boston University’s Center for Space Physics, told SpaceNews. “If we get it up there and get data back, this will give the community thinking about these kinds of missions a lot of useful experience.”

Under the leadership of Semeter and Brian Walsh, Boston University mechanical engineering professor, about 150 students helped design, develop and build ANDESITE. Since the project began, many of the students have moved on to jobs with space companies or government agencies.

Students still enrolled at Boston University had planned to celebrate the launch with their professors over pitchers of beer. That’s no longer possible. On March 17, Boston University canceled in-person classes and gatherings due to COVID-19, the new coronavirus.

Fortunately, ANDESITE is already in New Zealand. “We squeezed in integration by the skin of our teeth,” Semeter said.

“The most unique aspect of ANDESITE is that it’s got small satellite nodes inside of the spacecraft,” said Jason Armstrong, TriSept launch integration services director. “When they release the small nodes in orbit, this will demonstrate an interconnected network of small spacecraft to assess magnetic impacts of the atmosphere.”

ANDESITE demonstrates students can develop “elegant systems, cutting-edge designs and mission concepts that end up being beneficial to the industry,” Armstrong said.

None of the ANDESITE satellites have propulsion. If all goes as planned, the nodes will create a mesh network mapping electric current related to the Aurora Borealis for at least two to three weeks.

“We plan to fly these over cameras on the ground taking pictures of the optical aurora,” Semeter said. “If we get the network to make measurements over the region where the aurora is occurring, that will give us a good science nugget for this mission.”

While ANDESITE launch integration was straightforward, regulatory approval from the Federal Communications Commission, Federal Aviation Authority and New Zealand Space Agency was not.

“We had to show the regulatory and licensing authorities that the spacecraft and concept of operations did not pose any risk to on-orbit assets like the International Space Station and other satellites,” Armstrong said.

Helping shepherd ELaNa cubesats through the regulatory process is one of the tasks Chantilly, Virginia-based TriSept performs under the NASA Indefinite Delivery Indefinite Quantity contract awarded in December.