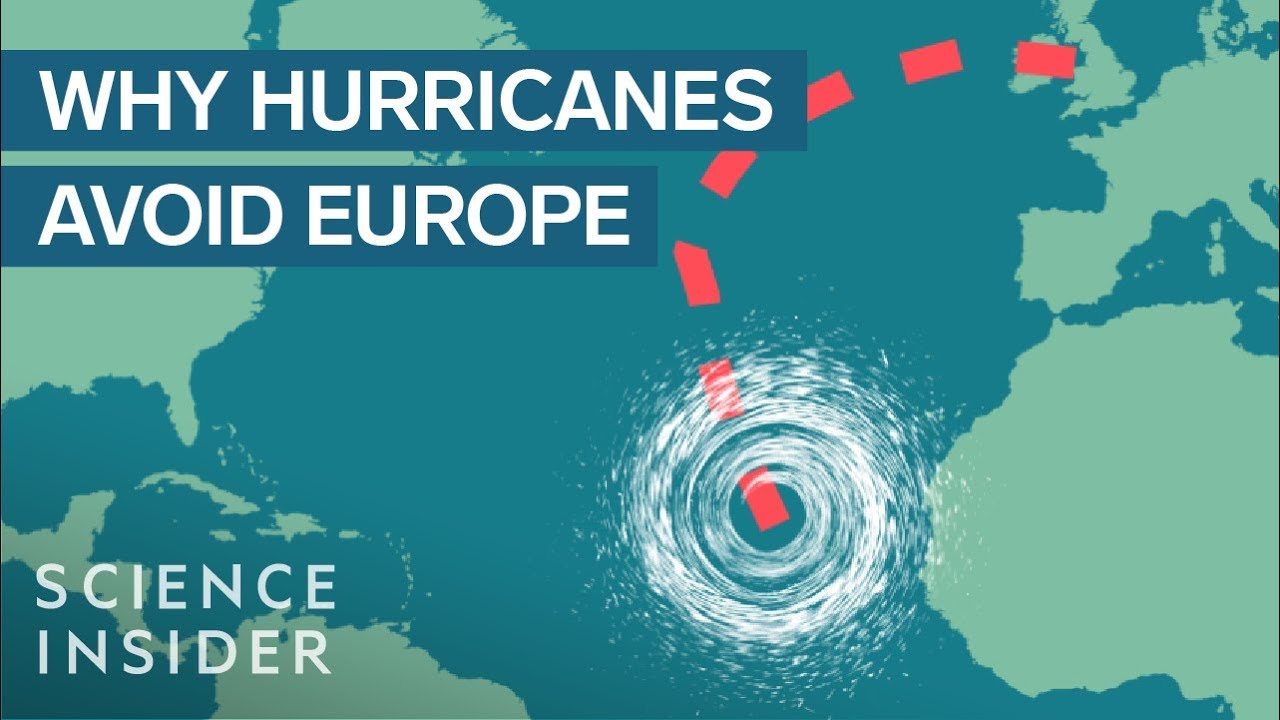 Why Hurricanes Hardly Ever Hit Europe

You don’t have to live far inland to avoid hurricanes. Just move to Europe. It rarely sees full-on hurricanes. But that may soon change. Following is a transcript of the video.

Europe hasn’t had a hurricane reach its shore in over 50 years. Now don’t get the wrong idea. Hurricane season still brings a hefty dose of wind and rain. But Europe has something that North America doesn’t, when it comes to protection against hurricanes. Location.

Hurricanes usually form off the coast of West Africa, where warm water near the Equator and high humidity create columns of rapidly rising rotating air. It’s the perfect recipe for a storm. Now the more warm, moist air that the system picks up, the stronger it becomes. That’s why a tropical storms can quickly grow into a full on hurricane as it marches across the Atlantic. Now normally hurricanes are propelled on a westward track by the trade winds, caused by the Earth’s rotation. That’s why Europe as well as the West Coast of the US, rarely experience full on hurricanes. But that’s not the whole story.

After all, since the year 2000, remnants of around 30 hurricanes have reached Europe. For comparison, Florida has seen 79 real hurricanes over the same time frame. By the time these remnants make landfall, they’ve went from a hurricane force, to a tropical storm or weaker. And that’s where Europe’s location comes into play. In order for a hurricane to head towards Europe, something crucial has to happen. It has to travel really far North by about 200 miles. Once a storm system reaches 30 degrees north, it encounters the subtropical jet stream. Which moves in the opposite direction of the trade winds. And therefore, blows the storm East But because the storm is now farther North, the waters underneath are colder by up to about five to 10 degrees Celsius. Which means less energy available to feed the storm. And as a result, it starts to die down by the time it’s headed for Europe. Even though it’s no longer a hurricane, it still packs a punch when it hits shore. In fact, most of these hurricane remnants will combine with other nearby cyclones and weather fronts, that create high winds and rain that mainly hit Ireland and Great Britain. But have been known to reach as far as Greece or even farther in Northern Russia. Typical damages include power outages, flooding, and occasionally casualties. Most recently the remnants of Hurricane Ophelia made landfall in Ireland and Scotland in 2017. About 50,000 households in Northern Ireland lost power. Three deaths were reported and downed trees closed many of the public roads and highways. This was the worst storm that Ireland had seen in 50 years. And it may be a sign of what’s to come.

As global surface temperatures rise, it will also increase the sea surface temperatures in the Northern Atlantic. Which researchers estimate could contribute to an increase in the number of hurricane force storms that reach Europe. Some experts predict that by the end of the 21st century, Europe could experience, on average, 13 powerful storms each year during hurricane season. Compared to the two per year it sees now.